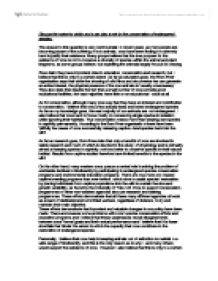 Discuss the extent to which zoo's can play a role in the conservation of endangered species.

Discuss the extent to which zoo's can play a role in the conservation of endangered species. The answer to this question is very controversial. In recent years, as more people are becoming aware of the suffering of zoo animals, zoos have been finding it extremely hard to justify their existence. Many groups believe that the true purpose for the existence of zoos is not to conserve a diversity of species within the animal and plant kingdoms, as some groups believe, but exploiting the animals largely for public viewing. Zoos claim they have important roles in education, conservation and research, but I believe that this is only to a certain extent. As far as education goes, the 'Born Free' organisation says that while the showing of wild films and documentaries can generate an active interest, the physical presence of the zoo animals is 'usually unnecessary'. ...read more.

As far as research goes, Born Free state that only a handful of zoos are involved in viable research and much of which is devoted to the study of physiology and is primarily aimed at keeping species in captivity, not how better to conserve species in their natural habitat. Results from captive studies therefore have limited benefits to the species in the wild. On the other hand, many western zoos pursue a central role in solving the problem of worldwide declines in biodiversity by participating in endangered species conservation programs and environmental education programs. There are now more zoo-based captive breeding programs than ever before, which aims to assist species' restoration by placing individuals from captive populations into the wild to sustain the size and genetic variability, as found by the University of Yale, US. ...read more.

However I also believe that this is only to a certain extent and that there are also many negative aspects, which these agencies fail to take into account. Having been to a zoo, I have observed that these organisations restrict the full use of the animal's abilities and senses, these animals are not given the freedom they would experience in the wild, and that the isolation and artificial environments affects the animal's natural behaviour. Zoos often show a distorted picture of wild animals. Zoo animals live in unnatural conditions, many of which display unnatural behaviours. Wild animals lead complex and unpredictable lives, and each species has evolved to ideally meet the challenges of its environment and I believe that these zoos can do little to properly replicate this with their animal displays. ...read more.