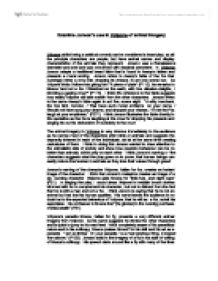 Examine Jonson's use in Volpone of animal imagery

Examine Jonson's use in Volpone of animal imagery Volpone whilst being a satirical comedy can be considered a beast play, as all the principle characters are people, but have animal names and display characteristics of the animals they represent. Jonson was a Renaissance dramatist and poet and was concerned with classical precedent. In Volpone, Jonson adapts a traditional beast fable that is found in Aesop's fables and presents a moral ending. Jonson refers to Aesop's fable of the fox that cunningly tricks a crow into dropping its cheese, in act one scene two. As Volpone tricks Voltore into giving him "A piece of plate" (P115), he remarks to Mosca "and not a fox / Stretched on the earth, with fine delusive sleights, / Mocking a gaping crow?" (P115). I think this reference to the fable suggests how easily Volpone will take wealth from the other characters. Jonson refers to the same Aesop's fable again in act five, scene eight. "A witty merchant, the fine bird, Corvino, / That have such moral emblems on your name, / Should not have sung your shame, and dropped your cheese, / To let the Fox laugh at your emptiness." ...read more.

I think Jonson also uses the snake to symbolise the cunning snake in the Garden of Eden, which deceived Eve and led to the fall of humanity. Mosca will deceive everyone and lead to the downfall of all the animalistic characters in the play. Jonson introduces the beginning of Volpone's visitors with the metaphor of birds feeding on carrion to illustrate the aims of the visitors. Volpone announces, "Begin their visitation! Vulture, kite, / Raven, and gor-crow, all my birds of prey, / That think me leaving carcass," (P31). The names of the characters function as metaphors, which create images of their true natures. The lawyer Voltore, named for the vulture is the first of the visitors hoping to feed off Volpone. In the staged play I would dress Voltore in his black lawyer's gown, the drapes of the gown representing the large black wings of the vulture. Jonson names the other two legacy hunters after carrion birds. Corbaccio the raven and Corvino the crow, visit Volpone after the vulture in their natural order of the largest most powerful bird first. Voltore who has more power as a lawyer, and then the smaller raven and lastly the crow visit the carcass. ...read more.

He is also by comparing him to a goat, accusing Bonario of being lecherous. Jonson uses animal imagery to identify the legacy hunters, and as Lady Would-Be joins the group of hopefuls, Jonson places her amongst the animals as a she-wolf. As Volpone invents his death he tells Mosca that "I shall have instantly my vulture, crow, / Raven, come flying hither on the news, / To peck for carrion, my she-wolf and all". (P235) I think Jonson is illustrating that Lady Would-Be is no longer a chattering parrot but has now become one of the greedy animals hoping to feed from the death of another. As Volpone hears his punishment and is led aside his final line is "This is called mortifying of a fox" (P297). I think that Jonson uses this quintuple pun to provide different images of the end of the fox. It is the humiliation of Volpone, bringing the fox to his death, tenderising animal meat or teaching sinners by punishment. At the end of Volpone, Jonson reinforces his moral message through animal imagery that greed and wrongdoing will want more and more until it destroys itself. As the characters are taken away to be punished the 1st Avocatore reminds the audience that "Mischeifs feed / Like beasts, till they be fat / and then they bleed" (P299). ...read more.