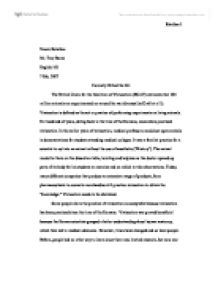 Nicole Katalbas Mr. Troy Burns English 101 7 Feb. 2007 Curiosity Killed the Cat The British Union for the Abolition of Vivisection (BUAV) estimates that 100 million animals are experimented on around the world annually (Graft et al 1). Vivisection is defined as the act or practice of performing experiments on living animals. For hundreds of years, dating back to the time of the Romans, researchers practiced vivisection. In the earlier years of vivisection, medical professors would cut open animals in demonstrations for students attending medical colleges. It was a familiar practice for a scientist to cut into an animal without the use of anesthetic ("History"). The animal would lie there on the dissection table, howling and helpless as the doctor opened up parts of its body for his students to examine and on which to take observations. Today, many different companies that produce an extensive range of products, from pharmaceuticals to cosmetic merchandise still practice vivisection to obtain the "knowledge." Vivisection needs to be abolished. Some people claim the practice of vivisection is acceptable because vivisection has been practiced since the time of the Romans. ...read more.

If animals have done nothing but die for human curiosity, then why experiment with the living, helpless animals? As Baird and Rosenbaum said "but what is wrong isn't the pain, isn't the suffering, isn't the deprivation. These compound what's wrong." Society should not take vivisection lightly because animals have no voice to defend themselves but they can feel everything a human can like pain, agony, suffering, and anguish. So if one cannot sacrifice a human, why sacrifice a poor defenseless animal for the curiosity of the human mind? It is claimed that the majority of those who are against vivisection are hypocrites. They eat meat and wear leather without feeling guilt, but then go around protesting vivisection, when the wearing of leather and eating of meat precipitated an animal's death. How do they justify their activities? The majority anti-vivisection groups are also vegetarians such as those who are members of People for the Ethical Treatment of Animals (PETA). People have the freedom to make their own decisions on their participation in the treatment of animals whether its being a vegetarian or anti-vivisection or both or neither. As time has progressed, so has technology so one would assume with the technological advances in science and medicine that alternatives to animal experiments would be used instead. ...read more.

Testing is immoral a. Examples rats shocked, starved rats, drugged monkeys (Graft et al 1-2) i. Psychologists shocked rats' feet leading to shocks in eyes and ears resulting in convulsions ii. In Japan, starved rats w/ electrodes in their necks and eyeballs forced to run in treadmills for 4 hours at a time. iii. Monkeys became addicted to drugs by automatic injection in their veins. Became cold cut monkeys thus, observed to die in convulsions and some plucked hair out or bit off their own fingers and toes. b. "What is wrong isn't the pain, isn't the suffering, isn't the deprivation" (Baird and Rosenbaum 78). i. "These compound what's wrong" (Baird and Rosenbaum 78). ii. The animals are living creatures and feel the pain like any person would. VIII. Hypocrites a. People eat meat or wear leather w/o guilt b. No sympathy for animals IX. Technology a. computer simulations i. "opportunity to correct errors and repeat parts of the experiment performed incorrectly or misinterpreted ...." Dr. Walker b. computer-aided graphic design i. assist in designing drugs which benenfitial to society ii. cannot completely understand the biological system X. Epidemiological studies a. proven to link smoking to lung cancer b. not always correct b/c of human error ?? ?? ?? ?? Katalbas ...read more.