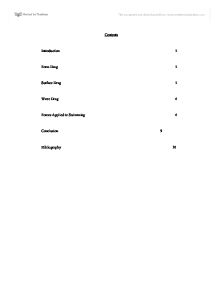 Form drag is determined by the shape or size of the athlete or object. It can also be called shape drag, profile drag, or pressure drag. This has been supported by Carr, G, “Form drag, also called shape drag, profile drag, and pressure drag, is produced by the shape and size of an athlete or an object.” The quicker that you travel, the more form drag is formed. To stop this athletes will streamline themselves, so that the air travels around them. “An area of high pressure develops in front where the athlete or object pushes against the air head-on. Immediately to the rear you find an area of turbulence.” Carr, G (2004:126).

In contrast to form drag, surface drag can cause the fluid to slow down; this is supported by Hall, S, “The layer of fluid particles immediately adjacent to the moving body is slowed because of the shear stress the body exerts on the fluid. Surface drag occurs when a fluid such as air or water comes into contact with the body, this has been supported by Cooke, C, “Surface drag is caused by the fluid in contact with the body or object moving with the surface of the object against the flow, which drags along the fluid next to it.”

In contrast to surface drag, when the athlete comes into direct contact with the fluid waves are formed. This has been supported by Knudson D, “At the surface of a fluid it is possible that disturbances will create waves within the fluid that resist the motion of an object with area projecting at this surface.” The size of the waves will depend on how your body is positioned in the water. Wave drag can only happen in sports which involve air and water, this has been supported by Bartlett, “Wave drag occurs only in sports in which an object moves through both water and air. As the object moves through the water, the pressure differences at its boundary cause the water level to raise and fall and waves are generated.” 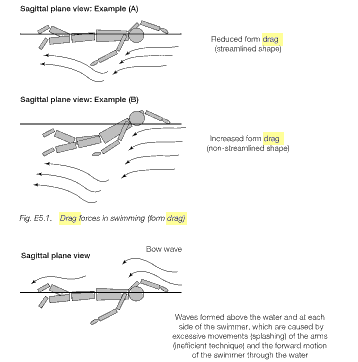 Swimmers will be able to reduce form drag by keeping their body more horizontal as you can see in figure 1. This means that there will be a lower surface area for the water to hit meaning the swimmer would glide through the water better. Whereas if the swimmers body was less horizontal as you can see in figure 1, there would be a bigger surface area for the water to cling on to the swimmer, meaning it would slow him down. This has been supported by McMaster. “Form drag is water resistance as a consequence of relative body position. The frontal form of the body moving through water influences this type of drag; a larger frontal profile produces more form drag. In swimming, the frontal profile can be influenced by body position. The more horizontal the body position, the less the form drag. Thus, a slanted body position, for example, low hips and legs, will increase the frontal profile and increase form drag. Not maintaining a straight longitudinal line by allowing side to-side sway will result in increased form drag.The hand enters the water fingertips first, in front of the head between the sagittal midline and the edge of the shoulder, with the thumb rotated slightly downward to minimize drag.” Cited by McMaster, W.

Swimmers will try to reduce surface drag by wearing body suits made from lightweight material such as lycra; this is a good material as the water will not stick to it meaning the swimmer can move more freely and quickly through the water. Some swimmers will also shave off their hair from their arms and legs, this is because water will cling on to your hair, which will slow you down, and this has been supported by McMaster, “The recent use of bodysuits made from special materials by competitive swimmers is an attempt to reduce frictional drag. Frictional drag results from shear stresses at the contact interface between skin and surface hair and the water. Swimmers commonly shave their heads and bodies to reduce this effect, although there is still controversy over the effectiveness of doing this. When considering the various forms of drag encountered during swimming, form and wave drag are more important elements than frictional drag.” Cited by McMaster, W.

Wave drag occurs when the body of the swimmer is in contact with the air and the water. This is due to the surface area of the swimmer. This means that if the swimmer gets to close to the surface of the water the bigger the wave, whereas the further away from the surface the smaller the waves will be, meaning there is less drag. This has been supported by Vennell R,“A deeply immersed solid body towed horizontally does not generate surface waves and drag is mainly due to skin friction and form drag. Viewed from a perspective moving with the body, the effect of the body is to force fluid to flow around it, distorting the flow near the body. In some regions, the distortion increases velocities and in others reduces velocities relative to the undisturbed flow, with the size of the velocity distortions decreasing with distance from the body. When the body moves close enough to the water’s surface for the distorted flow to impinge on the surface the pressure changes, due to the Bernoulli effect, associated with the distortion cause both depressions and elevations in the water’s surface above the body. These in turn create a wave wake and thus the body begins to experience wave drag. The closer the body is to the surface, the larger the depressions and elevations, leading to greater wave drag.” Cited by Vennell, R.