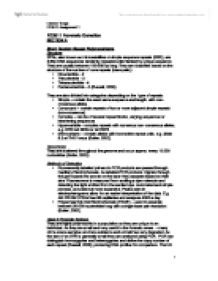 STRs, also known as microsatellites or simple sequence repeats (SSR), are 2-6bp DNA sequences tandemly repeated units flanked by unique sequence. They are usually between 100-300 bp long. They are classified based on the structure of the number of core repeats (base pairs):

They are also divided into categories depending on the type of repeats:

They are scattered throughout the genome and occur approx. every 10,000 nucleotides (Butler, 2005).

They are highly polymorphic in a population so they are unique to an individual. As they are small and very useful in the forensic sense – many crime scene samples are trace evidence and sometimes very degraded. As the size of an STR is generally small they are analysed using PCR.  PCR can distinguish homozygotes and heterozygotes and define the copy number of each repeat (Russell, 2006), producing DNA profiles for comparison. The UK developed the National DNA Database in which STRs profile are stored for comparisons.

STR typing is less expensive than other methods and can be automated to a degree (PCR) so it is faster and less labour-intensive. STRs are interpreted using population genetics and produce allele frequencies for each of the loci found (Klug, 2006).

There are multiplexing kits available to use for forensic purposes, SGM Plus is the most widely used in forensic science today. This kit amplifies 10 loci for comparison, giving a 1: 3.3 trillion probability. The kit also incorporates the amelogenin loci, which tells us the sex of the profile, useful if identification is needed for missing persons or if bodies are visually unrecognisable (Goodwin, 2007). The multiplexing kits are highly polymorphic (10-50 alleles or more) and are highly discriminatory.

A major problem when interpreting STRs is when stutter artefacts are present – this disguises the results and give misrepresentation of the data. Other problems include allele drop-out/in, spikes, pull up peaks etc (Clayton, 1998).

MiniSTRs have recently been developed which produces a product of 200bp, which brings STRs more inline with SNPs.  The future of STRs can only improve the quality and effectiveness as it has rapidly improved since it began.

There is no single method for SNPs, there are lots of methods and they can be mixed and matched.

The PCR product from SNPs can be as small as 100bp, which means that it will yield better results when analysing degraded DNA – STR amplicons are 300-400bp. Size base separation is not needed so the process can be almost completely automated.

There are no stutter artefacts associated with SNPs so interpretation is much easier. Allele specific primer extension in mtDNA SNP assay was used in a 40 year old missing person case. They couldn’t identify the exact family but found familiar alleles to 4 of the 60 samples taken for comparison (Sturk, 2008).

SNPs have a much lower mutation rate than STRs and become fixed in a population. SNPs and Y-SNPs can potentially provide information relating to ethnic origin and physical traits (from coding regions), which is vital information when dealing with missing persons and human remains that are unidentifiable. This can be especially useful if physical characteristics and ethnicity could lead to a suspect or missing persons, like in mass disasters.

There are some potential problems when looking at mixed samples due to SNPs being bi-allelic and having three possible genotypes (Butler, 2005). They hold limited information; between 50-80 SNPs are required to match the same levels of discrimination of STRs (Goodwin, 2007).

I don’t think SNPs will supersede STRs due to the differential uses they both have. E.g. STRs are excellent at analysing mixtures and SNPs are more superior at analysing degraded samples.