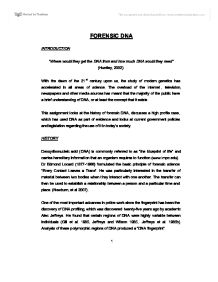 FORENSIC DNA INTRODUCTION "Where would they get the DNA from and how much DNA would they need" (Huntley, 2002). With the dawn of the 21st century upon us, the study of modern genetics has accelerated in all areas of science. The overload of the Internet, television, newspapers and other media sources has meant that the majority of the public have a brief understanding of DNA, or at least the concept that it exists. This assignment looks at the history of forensic DNA, discusses a high profile case, which has used DNA as part of evidence and looks at current government policies and legislation regarding the use of it in today's society. HISTORY Deoxyribonucleic acid (DNA) is commonly referred to as "the blueprint of life" and carries hereditary information that an organism requires to function (www.Impc.edu). Dr Edmond Locard (1877-1966) formulated the basic principle of forensic science: "Every Contact Leaves a Trace". He was particularly interested in the transfer of material between two bodies when they interact with one another. The transfer can then be used to establish a relationship between a person and a particular time and place. (Newburn, et al 2007). One of the most important advances in police work since the fingerprint has been the discovery of DNA profiling, which was discovered twenty-five years ago by academic Alec Jeffreys. ...read more.

allowed DNA to be retained from people charged with an offence, even if they were subsequently acquitted, furthermore The Criminal Justice Act (2003) allowed DNA to be taken at the point of arrest, which could be a contributing factor as to why the databases figures have risen dramatically in recent years. "The number of DNA profiles held on the DNA database increased by 40% between 2007 and 2009 and has now topped 4.5 million". (www.liberty-human-rights.org.uk) According to Howard Safir, NYC Police Commissioner, (1999) there are advantages of DNA data banking arrestees. Most major crimes involve Persistent prolific offenders (PPO), therefore identifying offenders would become easier. Investigators would be able to compare other cases against the arrested person's DNA profile, just as with fingerprints. This would enable previous unsolved cases 'cold cases' to be reopened and looked at. Samples taken at time of arrest rather than conviction allow innocent people currently incarcerated for crimes, excluded early in the investigative process and save time and money in the process. By 2003 the database held the DNA profiles of over 2 million people (Pepper, 2005) and In 2009 The UK National Database is the largest, per head of population, of any country in the world, with almost 10% of the population on the database (www.accessexcellence.org) Liberty are a group, that voice a concern with these figures and how the government and police amongst others strike the balance between intelligence and human rights. ...read more.

Problems could arise when these samples get into the wrong hands and could be used by an insurance company to blackball a person who is known to have a genetic defect. In the future, predicting the skin colour and facial characteristics from human samples will be next step in the history of forensics. The role it plays in the use of criminal investigation has yet to be decided. REFERENCE LIST Gaensslen, R.E. Harris, H.A. and Henry, L. (2008) Introduction to forensic science and criminalistics: Mcgraw-Hill p253. Hickley, M. (2009) Fury as Harriet Harman claims opponents of DNA database are "against justice";http://www.dailymail.co.uk/news Newburn, T. Williamson, T. Wright, A. (2007) Handbook of criminal investigation: Willan publishing Pepper, I. (2005) Crime scene investigation: McGraw - Hill education Open University press Williams, R and Johnson, P. (2008) Genetic Policing, The use of DNA in criminal investigations, willan publishing Forensic science service. http://forensic.gov.uk/html/media/case-studies/f-37.html (accessed 2.09 09) Forensic science service. http://www.forensic.gov.uk/html/media/case-studies/f-18.html, (accessed 25.09.09) 25.09.09) Genetics Home Reference Your Guide to Understanding Genetic Conditions (published September 18th 2009) http://ghr.nlm.nih.gov/handbook/basics/dna 6 Liberty - Protecting civil liberties promoting human rights. http://www.liberty-human-rights.org.uk/issues/3-privacy/index.shtml,(accessed 12.09.09) The Search for DNA - The Birth of Molecular Biology Biotechnology Industry Organization (BIO). "Biotechnology in Perspective." Washington, DC: Biotechnology Industry Organization 1990. http://www. AB/BC.org access excellence /RC/ /Search_for_DNA.php http://www.homeoffice.gov.uk/science-research/using-science/dna-database (accessed 30.09.09) http://www.lmpc.edu.au/c_linkList.php?KLA=Science&LEVEL=Stage%206%20Biology&CFRAME=Blueprint%20of%20life (accessed 01.10.09) http://news.bbc.co.uk/1/hi/uk/4584000.stm Call for inquiry into DNA samples (accessed 1.10.09). www.independent.co.uk/news/uk/crime/a-chilling-proposal-for-a-universal-dna-database-401503.html A 'chilling' proposal for a universal DNA database. 7 ...read more.