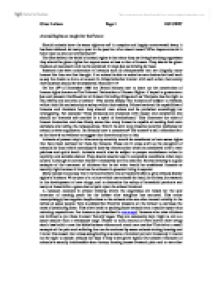 Should Animals Have the same Rights as us?

Animal Rights an insight for the Future Should animals have the same rights as us? A complex and largely controversial issue, it has been debated for many a year in the past but what does it mean? What impacts would it have upon us and our environment? The idea behind the belief of animal rights is that since they are living breathing organisms they should be given rights that equate more or less to that of human. They should be given freedom of movement and not be exploited in ways just as farming for food. Research has been undertaken in animals such as chimpanzees that are allegedly more human like than we first thought. If an animal is able to make its own choices for itself such as say the choice to hunt, or as seen in chimp behavior interact with each other, then surely their position should be reconsidered. Shouldn't it? On the 10th of December 1948 the United Nations met to draw up the constitution of human rights known as The Univeral Declaration of Human Rights. It hoped to guarantee a just and pleasant livelihood for all human including things such as 'Everyone has the right to life, liberty and security of person.' This means simply that humans are subject to freedom within their life and security or safety within their society. ...read more.

This often leads to packing more animals into a smaller space thus reducing expenditure. For instance (as described in www.spt) 'farmers who raise chickens are inclined to put them in small `battery' cages. They are commonly kept `eight to ten to a space smaller than a newspaper page. Unable to walk around or even stretch their wings much less build a nest the birds become vicious and attack one another' This is but a small example of the pain and suffering that can be endured by some animals during farming and it is for this reason that unless slaughtering was done a hundred per cent humanely it would not be right to exploit animals for food if they were given rights. Our present treatment of animals is morally indefensible since factory farming causes livestock pain and to use other techniques such as free range, which I would like to add our considerably more expensive, is just not going to happen any time soon. Many of us are equally unfamiliar with the many experiments that are conducted in animals daily. This is often vivisection which is experimenting on live animals to record their effects etc. Many of these are in the name of important drugs which could have life changing effects on us but some are not. ...read more.

The animal-rights view rejects the concept that animals are merely goods or property intended for the benefit of humans. The theory doesn't assume that animals and humans are completely equal and this is shown in things such as voting which requires a great deal of moral thinking and a knowledge of human political systems. The fundamental principle behind Animal Rights is that non human animals deserve to live free form harm, abuse and exploitation from humans. This means more than just treating animals well before they are exploited it means that animals have a right to be free from this exploitation as well as cruelty just as animals. Sir Aurobindo (faqfile.html) a poet and philosopher once said 'Life is life--whether in a cat, or dog or man. There is no difference there between a cat or a man. The idea of difference is a human conception for man's own advantage...' He is saying that it is a human idea that we are in some way inferior to other animals because we have the gift of greater intelligence but this does not mean that we have the right to exert our will upon other animals and treat them cruelly or exploit them. At the end of the day we are not so different and it is human blindness that causes us to wrong animals. ...read more.