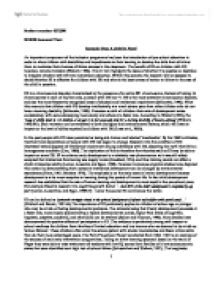 Student number: 0373390 SO2008 Assessed Task Scenario One: A child in Need An important component of the inclusion programme has been the introduction of pre-school education in order to allow children with disabilities and impediments to their learning to develop the skills that will allow them to maximise their chances of future success in the classroom. The benefit of EI on children with DS however, remains inclusive (Wishart, 1996). This in turn highlights the issue of whether it is possible or desirable to integrate children with DS into mainstream education. Within this scenario the research will be assessed to decide whether EI is effective for children with DS and what is the best course of action to follow in the case of the child in question. DS is a chromosomal disorder characterised by the presence of an extra #21 chromosome. Instead of having 46 chromosomes in each of his/her cells, a person with DS has 47. DS is the most prevalent chromosomal disorder, and also the most frequently recognised cause of physical and intellectual impairment (Selikowitz, 1990). What this means is that children with DS develop intellectually at a much slower pace than other children who do not have a learning disability (Selikowitz, 1990). However as with all children their rate of development varies considerably, with some developing more slowly and others at a faster rate. According to Wishart (1993), the 'range of ability levels in DS children at all ages is in fact unusually wide for a learning disability of known aetiology' (Wishart, 1993:391). Such variation can be attributed to both biological and environmental factors, which will have an impact on the level of ability acquired by children with DS (Laws et al., 2000). In the past people with DS were perceived as being sub-human and labelled 'uneducable'. By the 1960's attitudes, treatment and expectations of people with DS had begun to change. ...read more.

These activities have many benefits; the child will develop coordination and strong muscles as well as learning good social skills, communication and becoming more independent from their parents. Most importantly, they are taking their place within their community. For example Pueschel and Hopman (1993) report wide variation in communication skills across a wide age-spread of children with DS. ).++ Development is controlled by the brain. Children with DS have brains that are slightly differently formed from those of other children. This makes the process of learning new skills less efficient (Selikowitz, 1990:45). in Part III of the Children Act 1989 There are also the benefits of being amongst peers whose behaviour is likely to be age appropriate therefore. Integration has been an issue of increasing momentum for children with 'Special Educational needs' including those with Down syndrome (DS). Since the introduction of the Warnock report (1978) government policy has aim to increase the number of children with learning difficulties to be taught in mainstream education. This has had important implications on the nature of early intervention (EI) for children with DS. LINK EI with InterG In fact Connolly, Morgan, Russell, and Fulliton (1993) compared a group of 10 adolescents who had participated in early intervention in Tennessee with 10 age-matched adolescents who had not. They reported that the early intervention subjects had significantly higher scores on measures of cognitive abilities and adaptive behavior than did the comparison subjects. The mean IQ of the early intervention group was 40.1 compared with 30.5 for the comparison group, with IQ ranges of 25-53 versus 17-45, For example Connolly et al (1993) longitudinal study on the effectiveness of EI found that children with DS who had received EI did not show decline typically seen with age in children with DS as supported by Carr (2002). who found anddo not show as much decline in IQ scores as those who had not participated in EI Programme findings which are substaianted (Ludlow and Allen, 1979). ...read more.

Many children with DS do not progress beyond the intellectual capabilities of the average 6-8 year old and a significant number do not achieve even that. Children with DS may be leading healthier and happier lives and benefiting greatly from the growing acceptance of their right to take their place in the community but psychologists have so far made disappointing progress in identifying ways of helping them to compensate for the very real problems they encounter in learning basic childhood skills. When working only with children with DS, it can be all too easy to see only the progress being made and to lose sight of what is not being achieved and indeed may never be achieved. It is therefore especially important in evaluating findings from empirical studies of children with DS to have access to data from concurrent control groups of typically-developing children. Many studies, however, simply evaluate outcomes by comparing them with developmental norms for children without learning disabilities or with other findings in the DS literature. For lots of reasons, even when control groups have been used in empirical studies of development in DS, studies have more often been cross-sectional than longitudinal in design - looking at a group or groups of children across a specific age range but testing each individual child usually only once, or sometimes twice. Many of these have focused on a very limited age range of children and on the 'ifs and whens' of learning rather than on the actual dynamics of development. Averaging snap-shot data from cross-sectional studies of children of differing age levels is a very crude way of investigating the developmental process and given the huge variability in rate known to characterise development in DS, it is a method which can at best provide very limited developmental information. Longitudinal research is time-consuming and expensive and with children with DS often scattered across a wide range of schools, large scale studies are often logistically problematic. This kind of research is nevertheless crucial to achieving any real understanding of developmental processes in DS. ...read more.