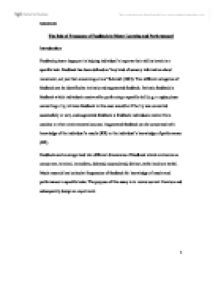 The Role of Frequency of Feedback in Motor Learning and Performance?

The Role of Frequency of Feedback in Motor Learning and Performance? Introduction Feedback plays a huge part in helping individual's improve their ability levels in a specific task. Feedback has been defined as "any kind of sensory information about movement, not just that concerning errors" Schmidt (1991). Two different categories of feedback can be identified as intrinsic and augmented feedback. Intrinsic feedback is feedback which individuals receive after performing a specific skill (e.g. a rugby player converting a try, intrinsic feedback in this case would be if the try was converted successfully or not), and augmented feedback is feedback individuals receive from coaches or other environmental sources. Augmented feedback can be concerned with knowledge of the individual's results (KR) or the individual's knowledge of performance (KP). Feedback can be categorized into different dimensions of feedback which are known as concurrent, terminal, immediate, delayed, accumulated, distinct, verbal and non verbal. ...read more.

The memory trace is slightly different to the perceptual trace but 'relies heavily on the perceptual trace for the moment-to-moment guidance of behaviour' (Adams, 1971) Based on the closed loop theory Adam's conducted a study in 1971. The findings of the study found that a high frequency of feedback is better for success during practice. Method Participants Fifteen random male undergraduate subjects all of whom were studying Sport and Exercise Science at Nottingham Trent University provided voluntary consent to take part in the study. The age of the participants varied from 18-23 years old, the weight of the students was between 75-100kg and the height of the participants varied between 150cm-180cm. With the use of a performance pre-test, it was ensured that all of the participants were at a novice level in the task that they were going to be participating in during the experiment. ...read more.