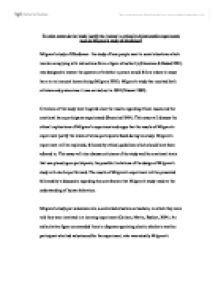 To what extent do the 'ends' justify the 'means' in ethically objectionable experiments such as Milgram's study of obedience?

To what extent do the ‘ends’ justify the ‘means’ in ethically objectionable experiments such as Milgram’s study of obedience?

Milgram’s study of Obedience - the study of how people react to social situations which involve complying with instructions from a figure of authority (Glassman & Hadad 2004) was designed to answer the question of whether a person would follow orders to cause harm to an innocent human being (Milgram 2005). Milgram’s study has received both criticism and praise since it was carried out in 1963 (Nissani 1990).

Milgram’s study put volunteers into a controlled situation as teachers, in which they were told they were involved in a learning experiment (Carlson, Martin, Buskist, 2004). An authoritative figure commanded them to dispense agonizing electric shocks to another participant who had volunteered for the experiment, who was actually Milgram’s associate. Milgram’s associate, known as the learner was strapped to a chair with electrodes attached to him (Brehm & Kassin 2005).

The learner and teacher communicated in separate rooms, in which the teacher asked the learner questions (Glassman & Hadad 2004). In response to every wrong answer the teacher administered an electric shock, which increased by 15V for every wrong answer that followed (Eysenck 1998). The experiment had a considerable feeling of realism, in which many participants showed considerable levels of anxiety and stress as they participated in the experiment (Baumrind, 1964).

Milgram’s experiment could not be conducted today in its original form as many issues are raised regarding ethical issues regarding his study (Gross 2003). The British Psychological Society and American Psychological Association, now ensure that we have set specific standards to cover most situations encountered as psychologists (APA 2006). In research experiments such as Milgram’s, it is important to receive full informed consent from participants, and also keep the level of deception to a minimum (Howitt & Cramer 2005). In addition, it is also important to ensure that participants should not face emotional stress that may lead to psychological or physical harm (BPS 2006).

Milgram’s experiment deceived participants, there were no actual electric shocks given by the equipment used, except the forty five volt sample used as a sample to the teacher, to re-enforce the belief that a electric current was being passed (Gross 2003), to add to this further, the participants administering shocks were told that the learner had a bad heart (Brehm & Kassin 2005).

The experiment continued to place considerable emotional strain upon participants. When participants wanted to withdraw from the experiment, they were told they could not. Milgram (2005:23) told participants to ‘please continue’; as they still showed considerable anxiety he reinforced his previous statement, stating ‘this experiment requires that you continue… you have no other choice you must go on’.

In addition to this, Milgram has also been criticized for being insensitive towards the suffering of his participants; (Baumrind, 1964) argues this point as Milgram cited by Baumrind, (1964:422) claims:

A mature business man…within 20 minutes…was reduced to a twitching, stuttering wreck, other subjects where observed to sweat, tremble, stutter, bite their lips, groan…we also observed 3 uncontrollable seizures take place, on one occasion, we observed a seizure so violent we had to halt to the experiment

Following this statement, Baumrind (1964) argues that there is no rational basis for the traumatic suffering of participants within the experiment, and furthermore states that informed consent must be acquired, ensuring participants are aware of all possible implications, which was not done in Milgram’s experiment. For those participants who complied, their upset was enhanced by the fact that should the shocks have been real they would have killed someone (Glassman & Haddad 2004).

Critics also claim that the experiment may have lacked validity which would mean the experiment put even more unnecessary stress on participants. It is argued that some participants may have been able to sense the unreality of the situation, and that laboratory experiments cannot be compared to the real world (Nassani 1990). However, when participants where asked if they believed that they were administering electric shocks, only 2.4 percent believed that the learner was not receiving shocks (Oliver & Jones 2005).

In response to this, Milgram moved his experiment to a run down office in Bridgeport to consider whether the laboratory at Yale University may have been a factor relating to his results. However there was no noticeable reduction in the levels of tension participants showed during the experiments at Bridgeport, and consequently there was no significant difference in obedience levels than those at Yale University (Milgram 2005).

A number of other factors were varied, such as the variance in obedience between males and females, in which there was no difference (Brehm & Kassin 2005). Other factors did have influences upon the levels of obedience such as the victim proximity, and when two teachers were put in place to work together, the level of obedience dropped dramatically, as they rebelled against the authoritative figure (Gross 2003).

Although participants with Milgram’s study where put under considerable emotional stress, he did conduct a full debrief following his experiments in which the true purpose of the study was explained, participants also later received a full written report of the experiment (Carlson, Martin, Buskist, 2004). In addition to this, Milgram followed up his debrief with questionnaires and interviews with participants regarding the study, he also had a psychiatrist conduct this measure with him, it was reported that there was no evidence of psychopathology in any of the participants following the study (Hogg & Vaughn 2005).  In this follow up it was also reported that 84 percent of participants were glad to have participated in the study and only 1.3 percent indicated they wish they hadn’t participated (Milgram 2005).

Milgram’s study provided results that where unexpected (Jones & Oliver 2005), and explained and helped us understand why people can behave such immoral ways. Milgram asked a panel of 110 experts on human behaviour, including 39 psychiatrists to predict how far a normal psychologically balanced person would go in these experiments (Hogg & Vaughn 2005). It was reported that such experts predicted that only 10 percent would exceed 180V, and no one would obey to the end, however 65 percent of participants administered the full voltage of 450V (Eysenck 1998).

The results of Milgram’s study were an example how we can behave, without being aware of it. Milgram (2005:7) responded to his results by stating that ‘simply ordinary people simply doing their job, and without any particular hostility on their part can become agents in terrible things’. Milgram’s study became rapidly sophisticated as he tried to answer critics by creating variables as previously discussed, his results became of more relevance and applicable to real world saturations when these factors where examined (Milgram 2005). Blass (1991) believes that the experiments are of great importance, and they consist of ‘meaningful, interesting humanistic study’ with ‘accurate, empirical, quantitative research’.

In conclusion Milgram’s study raised primary issues regarding human behavior, such as accepting our own responsibility for our actions and how this can form part of our own self concept (Gross 2003).  Milgram’s studies have helped us identify and be aware of blind obedience and demonstrated that certain situations can influence our behavior (Oliver & Jones 2005). The research that Milgram contributed to social psychological research has provided results that we can apply to real life situations and attempt to understand the cause of immoral events such as the Holocaust (Blass 1991).

Ethical issues that have been put forward in this essay would prevent such a study being replicated today, but a less harmful technique to test the means of obedience may be less applicable to the real world (Glassman & Hadad 2004). Milgram’s studies have been criticized heavily and justifiably so, it is undoubted that participants were placed under considerable stress. However, the application of his study to real world events is indisputable. In contrast, Milgram’s study of obedience is part of the most significant research in modern psychology, and although ethical issues are raised, the advances to our understanding of human behaviour are incontestable.

British Psychological Society (2006) Code of Ethics and Conduct, Available from –

Blass, T. (1991) Understanding Behaviour in the Milgram Obedience experiment: The Role of Personality, Situations, and Their Interactions, American Psychological Association, 60, 398-413.