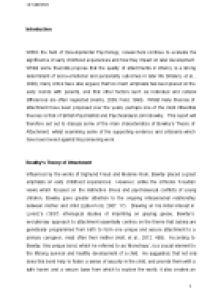 Within the field of Developmental Psychology, researchers continue to evaluate the significance of early childhood experiences and how they impact on later development.

﻿I.D 12001726 Introduction Within the field of Developmental Psychology, researchers continue to evaluate the significance of early childhood experiences and how they impact on later development. Whilst some theorists propose that the quality of attachments in infancy is a strong determinant of socio-emotional and personality outcomes in later life (Waters, et al., 2000), many critics have also argued, that too much emphasis has been placed on the early bonds with parents, and that other factors such as individual and cultural differences are often neglected (Harris, 2009: Field, 1996). Whilst many theories of attachment have been proposed over the years, perhaps one of the most influential theories is that of British Psychiatrist and Psychoanalyst John Bowlby. This report will therefore set out to discuss some of the main characteristics of Bowlby?s Theory of Attachment, whilst examining some of the supporting evidence and criticisms which have been levied against his pioneering work.[a] Bowlby?s Theory of Attachment Influenced by the works of Sigmund Freud and Melanie Klein, Bowlby placed a great emphasis on early childhood experiences. However, unlike the orthodox Freudian views which focused on the instinctive drives and psychosexual conflicts of young children, Bowlby gave greater attention to the ongoing interpersonal relationship between mother and child (Lister-Ford, 2007: 17). Drawing on his initial interest in Lorenz?s (1937) ...read more.

As a result of these studies, three types of attachment were identified, secure, insecure avoidant and insecure resistant, as well as identifying the importance of sensitive and responsive caregiving for the development of secure attachments. (N-Hoeksema, et al., 2009: 91-94). Whilst Ainsworth?s research has been replicated with consistent results appearing in other studies (Smith & Pedersen, 1988; Lewis & Feiring, 1989), it could be argued, however, that the ?Strange Situation? revolves around westernised norms and values towards attachment and so cultural differences may exist[d]. More recent evidence has been provided to support Bowlby?s theory on attachment in studies which have been conducted on the ?Cinderella Effect?, which is a term coined by psychologists to describe the increasing rates of abuse and maltreatment experienced by children at the hands of their step-parents. According to Workman & Reader (2014: 212) studies conducted by Daly and Wilson (1998), have shown that step-children are at a higher risk of being maltreated by their step-parent than their biological parent, and have shown that parents who are not genetically related, are 120 times more likely to murder their step-children than their own genetic offspring. Their studies have also shown that for children under the age of three, who have a step parent present in the family home, there is a 7 fold increased risk of experiencing abuse than if they had two biological parents present. ...read more.