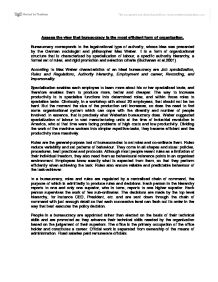 Assess the view that bureaucracy is the most efficient form of organization.

Assess the view that bureaucracy is the most efficient form of organization. Bureaucracy corresponds to the legal-rational type of authority, whose idea was presented by the German sociologist and philosopher Max Weber. It is a form of organizational structure that is characterized by specialization of labour, a specific authority hierarchy, a formal set of rules, and rigid promotion and selection criteria (Buchanan et al,2001). According to Max Weber characteristics of an ideal bureaucracy are Job specialization, Rules and Regulations, Authority hierarchy, Employment and career, Recording, and impersonality. Specialisation enables each employee to learn more about his or her specialised trade, and therefore enables them to produce more, better and cheaper. The way to increase productivity is to specialise functions into determined roles, and within those roles to specialise tasks. Obviously, in a workshop with about 20 employees, that should not be too hard. But the moment the size of the production unit increases, so does the need to find some organisational system which can cope with the diversity and number of people involved. In essence, that is precisely what Weberian bureaucracy does. Weber suggested specialization of labour to vast manufacturing units at the time of industrial revolution in America, who at that time were facing problems of high costs and low productivity. ...read more.

The organization therefore devotes few resources to time-consuming information and analysis to check whether the goals are met. There are already procedures and rules are laid out and workers are fully aware of them and due to repetition of their work, get use to them and therefore there is a predictive behaviour in the organization. As workers are chosen and promoted based on their technical skills, environment of equality is created in the organization. Impersonality assures that there is reduction of bias in the workplace. Employees have job security in a bureaucratic organization if he or she sticks to the rules and regulations of the organization. Every employee knows what his job is and therefore removing any uncertainty of the tasks to be done. These all job factors motivate the employees and hence their performance will rise, giving company savings on the costs. The American contribution to this system lay primarily in activity and cost measurement, in process engineering: standardization of components, processes, and products, and in the use of electric motors to reconfigure workflow. These innovations made possible the moving, or continuous, assembly line, in which each assembler performed a single, repetitive task. The moving assembly line was first implemented at Henry Ford's Model-T Plant at Highland Park, Michigan, in 1914, increasing labour productivity tenfold and permitting stunning price cuts -- from $780 in 1910 to $360 in 1914. ...read more.

Evidence indicates that monopoly power was positively associated with employment of administrators and teachers, thus supporting the bureaucratic expansion hypothesis. While misallocation of resources may suggest bureaucratic over-expansion, this result simply indicates that resources are misallocated in the California public school system. Bureaucracy theory is one model that explains resource misallocation, but others reasons may also explain why too many non-teachers and too few administrators appear to be hired. People within the bureaucracy have lost faith in the system: they assume it won't work. As a result, instead of following procedure, their immediate reaction is to bypass it, or at least try to, and follow their connections, instinct - or simply not do anything at all. Taking into account the rule-driven nature of a bureaucracy, this is a recipe for disaster. The overall conclusion from these attempts at making bureaucracy work is that one of the reasons why it does not work is because no one actually believes in it anymore. As a result, people ignore and bypass bureaucratic procedures anytime they can, which, indeed, fulfils the prophecy. Certainly, the slow response time of the system does not help, nor does the apparent arbitrariness of policy decisions, but there must be more than that to explain this profound mistrust in the system itself. ...read more.