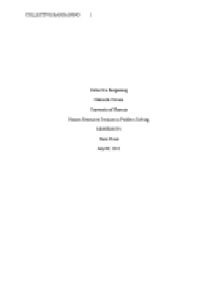 Collective Bargaining in the USA.

﻿COLLECTIVE BARGAINING Collective Bargaining Gabrielle Cavani University of Phoenix Human Resources Seminar in Problem Solving MMHRM/591 Karri Perez July 09, 2012 ________________ Collective Bargaining Labor Unions have a very long and colorful history, they go back as early as the 1600?s when the pilgrims landed on Plymouth Rock. Working craftsmen such as carpenters, cordwainers, cabinet makers and cobblers all became parts of the workers union. These Unions were created to assist the workers in getting better working hours, pay, benefits, working conditions?etc?(?The Labor Union Movement in America?, 2012) They were created to be the voice of the common blue collared worker and to make sure they were being treated fairly. As the years progressed so did the Unions. They started multiplying and becoming stronger and more employees wanted to join them knowing that they would be protected. Unions were very important to workers and their families for they provided the employees with a chance to be seen and heard. As the Labor Unions got stronger, so did the holds that they had on their members. Once you were apart of a Union, there was a chance that you would be stuck staying there until you either retired or were laid off. Even then, if your Union charged any membership dues, there was a possibility that you would still have to pay them even if you were not a member anymore. ...read more.

to continue to pay their dues and new employees have the right to choose whether or not they want to be apart of them. Labor Unions rely on their members money to help finance their causes, although they will say it is to continue to allow them to offer fair working condition protection for their members. If they lose their already joined members and don?t get to call the shots on bringing in new members, this causes a large inconvenience for them, this is why the majority of Labor Unions are trying to fight these Right to Work Laws from happening in their states. Right now there are 23 US states that have adopted the Right to Work Laws with other states looking to follow in their footsteps. Human Resources and Collective Bargaining Initiatives Collective bargaining consists of negotiations between an employer and a group of employees so as to determine the conditions of employment. The result of collective bargaining procedures is a collective agreement. Employees are often represented in bargaining by a union or other labor organization. Collective bargaining is governed by federal and state statutory laws, administrative agency regulations, and judicial decisions. In areas where federal and state law overlap, state laws are preempted. (?Collective Bargaining?, 2012) The role that Human Resources play in collective bargaining initiatives is defined by the NLRA. ...read more.

Key Characteristics Some Key Characteristics of Collective Bargaining Industries include: 1. Encouragement of Unions and Associations getting along to reduce the risk of strikes and to continue to protect employees from horrible working conditions. 2. Better chances of great collective bargaining agreements between the employee, union and employer. 3. Continued protection from the unions 4. Better Problem Solving Some Key Characteristics of Non Collective Bargaining Industries include: 1. Higher risks of strikes and lockouts 2. Unfavorable and or weak union conditions 3. No employee protection against fair working conditions 4. No Collective Bargaining agreements being made Conclusion Unions are here to help protect the employees from unfair working conditions. They give a voice to the employees by working with the employers and creating collective bargaining agreements that will be of satisfaction to all parties involved. Laws such as the National Relation Labor Act and the Taft-Hartley Act were set into place to protect the employees from unfair treatment from the labor unions. The Right to Work Law also assisted employees with the right to choose whether or not they wanted to be apart of a union as well as the right to leave a union without having to fear any repercussions of doing so. Whether or not an employee is forced into a Union or not, with all these laws and regulations set into place, they still have the protection they need to thrive greatly in their careers. ...read more.