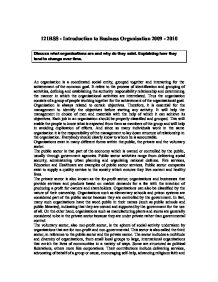 Discuss what organisations are and why do they exist. Explaining how they tend to change over time.

Discuss what organisations are and why do they exist. Explaining how they tend to change over time.

An organisation is a coordinated social entity, grouped together and interacting for the achievement of the common goal. It refers to the process of identification and grouping of activities, defining and establishing the authority responsibility relationship and determining the manner in which the organisational activities are interrelated. Thus the organisation consists of a group of people working together for the achievement of the organisational goal. Organisation is always related to certain objectives. Therefore, it is essential for the management to identify the objectives before starting any activity. It will help the management in choice of men and materials with the help of which it can achieve its objectives. Each job in an organisation should be properly classified and grouped. This will enable the people to know what is expected from them as members of the group and will help in avoiding duplication of efforts. And since so many individuals work in the same organisation it is the responsibility of the management to lay down structure of relationship in the organisation. Everybody should clearly know to whom he is accountable.

Organisations exist in many different forms within the public, the private and the voluntary sector.

The public sector is that part of the economy which is owned or controlled by the public, usually through government agencies. Public sector activities range from delivering social security, administering urban planning and organizing national defence. Fire services, Education and Healthcare are examples of public sector services. Public sector companies exist to supply a quality service to the society which ensures they live content and healthy lives.

The private sector is also known as the for-profit sector; organizations and businesses that provide services and products based on market demands for a fee with the intention of producing a profit for owners and shareholders. Organizations can also be classified by the nature of their ownership. Organizations such as elementary schools and prison systems are considered part of the public sector because they are controlled by the government. In fact, many such organizations have the word public in their names (such as public schools and public libraries), indicating that they are owned and supported by the government for the use of all. On the other hand, organizations such as manufacturing plants and stores are generally considered to be in the private sector because they are under private rather than governmental control.

The voluntary sector, also non-profit sector, is the sphere of social activity undertaken by organizations that are for non-profit and non-governmental. This sector is also called the third sector, in reference to the public sector and the private sector.The sector includes a multitude and diversity of organizations, from small local groups to large, international organizations that enrich the lives of communities in a variety of ways. Some are structured as political federations, others more like corporations. Their contributions include delivering services, advocating of behalf of a group or cause, encouraging self-help, advancing religious faith and practice, facilitating economic development and providing financial support to other organizations. Some are considered “charities” and some are not.

Most of the organizations tend to change over the period of time because those which do not change cannot survive in the demanding world of globalization. It is the rule for the going-concern of organizations to keep bringing some change and innovations for the customers. There are various ways through which they can change over time. Here are some examples of organisations changes : Change in the objectives - consistent with the strategy imperative, if an organisation chooses to move from being an innovator to being a mass producer. Purchase of new equipment - mew equipment and technological processes often lead to changes in power and reporting relationships within organisations. It can also make an organisation more mechanistic, as there is greater capital intensity within the organisation. Government Regulations - the passage of new laws creates the need to establish new departments and changes the power of current departments. Globalisation - the lowering of tariffs  and freeing the capital flows have led to organisations seeking higher efficiencies by focusing more on their core competencies, and disposing of peripheral businesses. It has also greatly increased the number of companies with overseas operations. Decline in profits - when corporation has profit fall, management often resort to a structural shake-up. Personnel will be shuffled, departments added or deleted, decision-making patterns significantly altered. Reduction in layers of management - as organisations can offer few promotions to employees, they must consider changes in tasks and responsibilities in order to broaden employees’ skills and keep them interested in their jobs. Managers must diagnose the problem(s) and determine their criticality. This diagnosis should guide the development of the change plan. It is often assisted by consultant familiar with the industry.

A wide range of forces can initiate change. Organisations need to change and adapt in order to be effective.

An organisation is a consciously managed and coordinated social entity, with an identifiable boundary, which functions on a relatively continuous basis to achieve a common goal or set of goals. It creates goods and services for customers, takes a number of inputs, add value by processing the input and producing an output. Every organisation comes into existence on the basis of goals of the enterprise which are separate from the personal goals of the people employed. It is the common purpose of the organisation which provides the basis of cooperation among the members of the organisation.Significant organizational change occurs, for example, when an organization changes its overall strategy for success, adds or removes a major section or practice, and/or wants to change the very nature by which it operates. It also occurs when an organization evolves through various life cycles, just like people must successfully evolve through life cycles. For organizations to develop, they often must undergo significant change at various points in their development.