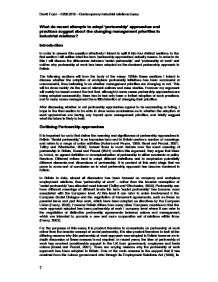 What do recent attempts to adopt 'partnership' approaches and practices suggest about the changing management priorities in industrial relations?

has changed managements priorities, indeed management at Barclays now appear to be much more cooperative with unions allowing for greater communication and much higher levels of trust between the two parties. Finally the partnership agreements agreed by Welsh Water also indicate that management priorities are changing. A culture-change programme was initiated and two key foundations were put in place: a joint project to involve the unions in changing working practices; and a strong commitment to management development and training (Tailby and Winchester, 2000). Four partnership agreements have been agreed between management and full time union officials between 1991 and 1998 proposing such things as new pay formulas, more flexible working conditions, empowerment and greater job security. These packages have been hailed as a major breakthrough in union management relations as it indicates a move away from an adversarial structure of annual pay negotiations towards greater trust in relations between management, unions and employees based on job security (Tailby and Winchester, 2000). It can be argued that the above examples do indicate that management priorities in Industrial relations appear to be changing due to the adoption of partnership approaches. There appears, in the above companies to be a move away from previously adversarial bargaining structures towards a higher degree of trust and cooperation in line with the four-point model outlined at the start of this section. This has been achieved via the introduction (amongst others) of increased team working, job security, training opportunities and the development of such things as problem solving groups and company councils. The work of Tailby and Winchester (2000) helps us to sum up this section effectively. They argue that the process of developing, negotiating and gaining acceptance of partnership agreements within the organisation does seem to have some 'distinctive features' which imply 'an ideological break with past practice', in particular, a long term view of the organisation and employee relations, with an emphasis on 'jointism', openness and trust. ...read more.

in fact he argues that management may be using partnership under false pretences, to try and further incorporate unions into the organisation and thus reduce their influence further. The case for changing management priorities is further weakened by the fact that many partnership agreements arose from a business crisis, resulting in unions being forced into such agreements, thus indicating an employer-dominant process of reform. I presented the view at the start of this essay that although there is no doubt that in some cases partnership approaches are being adopted successfully and changing management's priorities, there has only been a limited adoption of such practices and in fact in many cases management have little intention of changing their priorities. In my opinion after looking at the evidence, this appears to be the correct conclusion. I do not pretend to deny that in some cases such as Welsh Water and Barclays, management appear to have adopted partnership enthusiastically and there does appear to have been a real change in their attitude / priorities from their previously adversarial approaches. However in the current industrial relations climate it appears to be the case that partnership is only having a limited adoption and in many cases both management and unions are sceptical of each others motives for adopting partnership approaches, with neither side wanting to loose influence. Kelly (1996) states 'it is hard for unions to achieve a partnership with a party who would prefer they didn't exist', and in many cases unions have no choice but to accept partnership agreements and thus incorporation into management's objectives. However is this always going to be the case? The future for industrial relations in Britain is still unclear, the current governments intentions appear to be to support partnership approaches, however the wider adoption of partnership approaches depends upon whether the current government will endorse forthcoming EU legislation regarding the introduction of Work Councils, which could lead to Britain having strong, statutory provision for worker representation similar to the likes of Germany. ...read more.