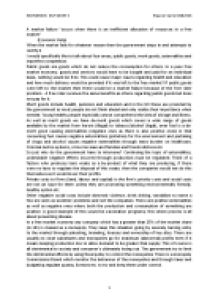 ﻿ECONOMICS OUTCOME 3 Eleanor Carrol 0402314 A market failure "occurs when there is an inefficient allocation of resources in a free market" (Economic Help) When the market fails for whatever reason then the government steps in and attempts to rectify it. I would specifically like to talk about four areas, public goods, merit goods, externalities and imperfect competition. Public goods are goods which do not reduce the consumption for others. In a pure free market economy, goods and services would have to be bought and paid for an individual basis, nothing would be free. This could cause major issues regarding health and education and how much defence would be provided if it was left to the free market? If public goods were left to the market then there would be a market failure because of the free rider problem. A free rider receives the same benefits as others regarding public goods but does not pay for it. Merit goods include health, pensions and education and in the UK these are provided by the government as most people do not think ahead and only realise their importance when needed. ...read more.

The policy tools used which include environmental taxes, trading systems and voluntary agreements and participation present the government with barriers as not everyone can participate or want to participate. Experts have concerns over how little research has been carried out on some of the policies and are unconvinced of the efficiency and effectiveness of some of them. Others disagree about how policies are to implemented and feel that there will be a detrimental effect on competition. According to Tony Grayling of the Institute of Public Policy Research Renewable Energy, "the government is way off target" (The Guardian 2004) Dr Jeremy Leggett CEO of environmental group Solar Energy argues that ?there is a huge gap in what the government are saying and what the policies are actually doing". (Alok Jah the Guardian 2007) Penny Shepherd CEO of UKSIF specialising in green investments along with other business leaders, investors and campaigners believes David Cameron's dramatic promise to lead the greenest ever government has been followed by u-turns and delayed policies and has delivered a thumbs down to the governments record on environmental issues. (F. Harvey & D Carrington The Guardian 2011) If we are to believe these experts which have spanned 2004 through 2011, then there appears to be little hope for the government to have their environmental policies hailed a success. ...read more.