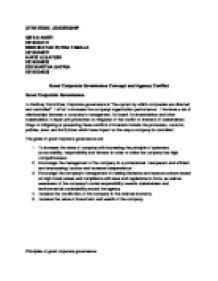 STRATEGIC LEADERSHIP GIFAN ANEFI 0910524121 RIDO IDAYAH PUTRA TAMALA 0910524027 HAFIZ ALSATORI 0910524032 DIO MARTHA SATRIA 0910524029 Good Corporate Governance Concept and Agency Conflict Good Corporate Governance In Cadbury Committee, Corporate governance is "the system by which companies are directed and controlled". It effort to increase the company/ organization performance. It involves a set of relationships between a company's management, its board, its shareholders and other stakeholders; it deals with prevention or mitigation of the conflict of interests of stakeholders. Ways of mitigating or preventing these conflicts of interests include the processes, customs, policies, laws, and institutions which have impact on the way a company is controlled. The goals of good corporate governance are: 1. To increase the value of company with increasing the principle of openness, accountability, responsibility and fairness in order to make the company has high competitiveness. 2. Encourage the management of the company in a professional, transparent and efficient, and empowering function and increase independence. 3. Encourage the company's management in making decisions and execute actions based on high moral values ??and compliance with laws and regulations in force, as well as awareness of the company's social responsibility towards stakeholders and environmental sustainability around the agency. ...read more.

and making decisions related to how the proceeds are invested 2. The agency conflict between shareholders and creditors. Costs incurred by the firm to reduce agency problems (agency conflict) is known as agency costs, which includes monitoring expenditures, bonding and residual loss Agency Costs A type of internal cost that arises from, or must be paid to, an agent acting on behalf of a principal. Agency costs arise because of core problems such as conflicts of interest between shareholders and management. Shareholders wish for management to run the company in a way that increases shareholder value. But management may wish to grow the company in ways that maximize their personal power and wealth that may not be in the best interests of shareholders. Some common examples of the principal-agent relationship include: management (agent) and shareholders (principal), or politicians (agent) and voters (principal). Agency costs are inevitable within an organization whenever the principals are not completely in charge; the costs can usually be best spent on providing proper material incentives (such as performance bonuses and stock options) and moral incentives for agents to properly execute their duties, thereby aligning the interests of principals (owners) and agents. Reference: http://en.wikipedia.org http://syaifulali.wordpress.com http://jafis.wordpress.com ...read more.