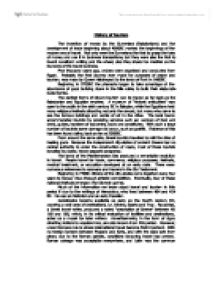 History of tourism The invention of money by the Sumerians (Babylonians) and the development of trade beginning about 4000BC marked the beginnings of the modern era of travel. Not only were the Sumerians the first to grasp the idea of money and use it in business transactions, but they were also the first to invent cuneiform writing and the wheel, also they should be credited as the founders of the travel business. Five thousand years ago, cruises were organised and conducted from Egypt. Probably the first journey ever made for purposes of peace and tourism, was made by Queen Hatshepsut to the lands of Punt in 1480BC. Beginning in 2700BC the pharaohs began to take advantage of the abundance of good building stone in the Nile valley to build their elaborate burial tombs. The earliest forms of leisure tourism can be traced as far back as the Babylonian and Egyptian empires. A museum of "historic antiquities" was open to the public in the sixth century BC in Babylon, while the Egyptians held many religious festivals attracting not only the devout, but many who came to see the famous buildings and works of art in the cities. ...read more.

Advertisements, in the form of signs directing visitors to wayside inns, are also known from this period. However, under Romans rule is where international travel became first important. With no foreign borders between England and Syria, and with the seas safe from piracy due to the Roman patrols, conditions favouring travel had arrived. Roman coinage was acceptable everywhere, and Latin was the common language. Romans travelled to Sicily, Greece, Rhodes, and Troy, Egypt and from the third century AD, to the Holy Land. Domestic tourism also flourished within the Roman Empire. Second homes were built by the wealthy within easy travelling distance of Rome, occupied particularly during the springtime social season. The most fashionable resorts were to found around the Bay of Naples, and there is evidence of early market segmentation between these destinations. Naples itself attracted the retired and the intellectuals. Following the collapse of the middle ages, travellers where less interested in the previous type of travel, it was less attractive, more dangerous, and difficult. ...read more.

The appeal soon became social, and pleasure seeking young men of leisure travelled, predominantly to France and Italy, to enjoy the rival cultures and social life of cities such as Paris, Venice, or Florence. By the end of the eighteenth century, the custom had become institutionalised for the gentry. Passports have their origins in the medieval testimonial. A letter from an ecclesiastical superior given to a pilgrim to avoid the latter's possible arrest on charges of vagrancy. Later, papers of authority to travel were more widely issued by the state, particularly during periods of warfare with neighbouring European countries. Spas were already well established during the time of the Roman Empire, but their popularity, based on the supposed medical benefits of the waters, lapsed in the subsequent centuries. The sick continued to visit Bath throughout the Middle Ages, Renewed interest in the therapeutic qualities of mineral waters has been ascribed to the influence of the Renaissance in Britain, and elsewhere in Europe. Taking the cure rapidly developed social status, ...read more.