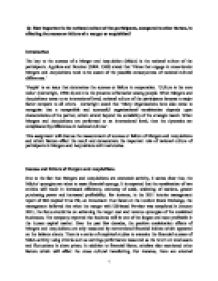 How important is the national culture of the participants, compared to other factors, in affecting the success or failure of a merger or acquisition?

When culture comes to a business level, it can be considered to be national and organisational. National culture is a shared value that is deeply ingrained, while organisational culture stems more from practices than from individual values. National culture is shaped by tradition, and reflects economic and social history as well as climate and other demographic conditions. Different nations have different cultures. For example, in Japan, people keep separate their business and personal lives. So that it is considered taboo to talk about a colleague's family during working hours. On the other hand, discussion of these matters in the USA is often used as a means of 'breaking the ice' and establishing relationship (Cartwright, 1996: 59). National ideologies are reflected in the relationship between business and government, the orientation of the economy and financial institutions, and trade union influence. By understanding the cultural difference between Japan and USA, the following examples explain how national culture affects approaches to innovation and technological change. For instance, Cartwright quoted a survey of European, American, and Japanese firms which found that there are contrasting incremental or radical approaches to manufacturing. Different time orientations were also found to affect the priority given to product quality vs. delivery goals by Ferdows et al., (1985). Furthermore, Schneider (1989: 149) had shown some evidence that 'national culture could play an important role in strategy formulation and influences the nature of the relationship of an organisation with its environment as well as relationships among people within an organisation'. It also influences how much room for transformation that merging firms have (Aguilera and Dencker, 2004: 360). For example, in associative cultures, such as Japan, China, Greece and Spain, information processing is dependent on the context and it occurs amongst individuals who share a great deal of common information and common ways of thinking, this reflects an affective-intuitive approach. ...read more.