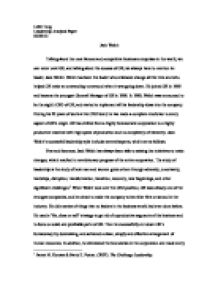 Jack Welch. Welch has been the leader who embraced change all the time and who helped GE make an outstanding turnaround when it was going down.

Lefei Tong Leadership Analysis Paper 03/28/12 Jack Welch Talking about the most famous and competitive business enterprises in the world, we can never omit GE, and talking about the success of GE, we always have to mention its leader, Jack Welch. Welch has been the leader who embraced change all the time and who helped GE make an outstanding turnaround when it was going down. He joined GE in 1960 and became the youngest General Manager of GE in 1968. In 1980, Welch was announced to be the eighth CEO of GE, and started to implement all his leadership ideas into the company. During his 20 years of work at the CEO level, he has made a complete revolution to every aspect of GE's origin. GE has shifted from a highly bureaucratic corporation to a highly productive machine with high speed of production and no complexity of hierarchy. Jack Welch's successful leadership style includes several aspects, which are as follows. First and foremost, Jack Welch has always been able to seizing the initiatives to make changes, which resulted in revolutionary progress of the entire corporation. The study of leadership is the study of how men and women guide others through adversity, uncertainty, hardships, disruption, transformation, transition, recovery, new beginnings, and other significant challenges.1 When Welch took over the CEO position, GE was already one of the strongest companies, and he aimed to make the company to be either first or second in the industry. ...read more.

His ultimate goal was to create an enterprise that can tap the benefits of global scale and diversity without the stifling costs of bureaucratic controls and hierarchical authority and without a managerial focus on personal power and self-perpetuation. This requires a transformation not only of systems and procedures but also of people themselves. In 1989, Welch designed a 10-year program called "WORK-OUT", wherein workers were given freedom to share their views with their managers. Through this program, Jack Welch gave the employees the right and responsibility to come up with their own idea for solving problems. Thus, the "boss element" was removed from GE, and everyone had a voice and participate in the management of the entire corporation, instead of boss dictating every step in the decision making process. By getting more involvement on the side of the employees, Welch not only improved the production efficiency within GE but also increased the job security of the employees. Welch has used his charisma to create a climate of collaboration to determine what the group needs in order to do their work and to build the team around common purpose and mutual respect.4 Charisma is not something people are born with, but rather a skill people need to develop by understanding how to inspire, encourage and unite the followers. ...read more.