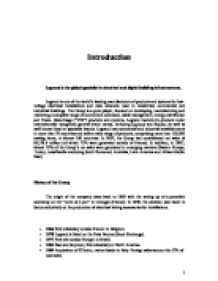 Introduction Legrand is the global specialist in electrical and digital building infrastructures. Legrand is one of the world's leading manufacturers of products and systems for low-voltage electrical installations and data networks used in residential, commercial and industrial buildings. The Group is a pure player, focused on developing, manufacturing and marketing a complete range of control and command, cable management, energy distribution and Voice- Data-Image ("VDI") products and systems. Legrand markets its products under internationally recognized general brand names, including Legrand and Bticino, as well as well-known local or specialist brands. Legrand has commercial and industrial establishments in more than 70 countries and sells a wide range of products, comprising more than 150,000 catalog items, in almost 180 countries. In 2007, the Group had consolidated net sales of �4,128.8 million (of which 75% were generated outside of France). In addition, in 2007, almost 25% of the Group's net sales were generated in emerging markets (Eastern Europe, Turkey, Asia/Pacific excluding South Korea and Australia, Latin America and Africa-Middle East). History of the Group The origin of the company dates back to 1860 with the setting up of a porcelain workshop on the "route de Lyon" in Limoges (France). In 1949, the decision was taken to focus exclusively on the production of electrical wiring accessories for installations. * 1966 First subsidiary outside France: in Belgium. * 1970 Legrand is listed on the Paris Bourse (Stock Exchange). * 1977 First site outside Europe: in Brazil. * 1984 Pass and Seymour, first subsidiary in North America. * 1989 Acquisition of BTicino, market leader in Italy. Foreign sales account for 57% of total sales * 1992 Acquisition of Baco (France) and Tenby (United Kingdom). * 1995 RTGamma (Italy) joins the Group. * 1996 Acquisition of The Watt Stopper (United States), FAEL (Poland), Luminex (Colombia) and MDS (India) - Launch of LEXIC, a range of protection products for the European market. ...read more.

6. Strategy a) Accelerate growth: -expand market coverage and improve its commercial efficiency -focus on markets with high growth potential -expand geographic presence -drive innovation by increasing the number of research and development projects designed o renew and enhance Legrand's product range - accelerate growth through targeted and recurring acquisitions b) Increase cash flow and optimize capital employment c) Optimize cost structure to improve productivity and flexibility 7. Company's structure External Environment 1. The broad environment Forces in the broad environment can have a tremendous impact on a firm and its task environment; however, individual firms typically have only a marginal ability to influence these forces. In rare cases, individual firms can influence trends in the broad environment, as when innovations at Intel influence technological trends in the microprocessor, microcomputer, and software industries. In general, however, it is virtually impossible for one independent firm to dramatically influence societal views on abortion, policies on free trade with China, migration to the Sun Belt, the number of school-age children, or even the desirability of particular clothing styles. Consequently, although firms may be able to influence the broad environment to some degree, the emphasis in this book generally will be on analyzing and responding to this segment of the environment. The most important elements in the broad environment, as it relates to a business organization and its task environment, are global socio-cultural, economic, technological, and political/legal forces. * socio-cultural forces : issues related system of values, customs, traditions and norms that govern people's status in society. * global technological forces: technological innovation is very important for Legrand * global economic forces: due to the economic environment in Romania, not all people can buy the firms products * political/legal forces: it influences the company very little in Romania 2. Task environment The task environment consists of stakeholders with whom organizations interact on a fairly regular basis. These stakeholders include domestic and international customers, suppliers, competitors, government agencies and administrators. ...read more.

In the Finance Department, responsive structures and high levels of personal responsibility within our teams are a given. Over the years, these have enabled us to build up what have become very precise methods to oversee operating units using frequent, detailed reporting to exacting standards -a key asset in the current environment. As a result, our cultural focus on economic performance has become widely shared and structures the way managers go about their jobs. Annual assessments of these managers are also partly based on the operating income generated by their business, less the cost of the capital they decide to employ-in other words, on their capacity to generate free cash flow. How does financial management allow for the specifics of different business areas? There is a lot of to-and-fro between staffing at operating units and headquarters. To take my own example, I held several positions in the financial management of subsidiaries before I moved on to the Wiring Devices Division, then Finance Department.That smoothes the way for dialog with local managers, since our department is in touch with operating issues and in a position to make proposals. Conclusion Legrand is the world specialist in products and systems for electrical installations and information networks wherever people live and work. They serve global markets through distributors offering innovative solutions to meet the needs of electricians, specifiers and households. In close touch with customers, they develop and produce a range that holds close to 170,000 catalog items distributed in nearly 180 countries. As world leader in wiring devices and cable management, the company draws on the resources of a global supply chain that combines flexibility and responsiveness. No. 1 positions on a large number of local markets give the business a solid base. With 4.4% of sales allocated to R&D in 2000, they make innovation the main lever for growth on markets undergoing constant change. Innovation drives the ambition to combine simplicity with high value added, and innovation is behind new functions with stylish design in solutions that enhance energy efficiency and comfort, by the same token favouring responsible consumption of electricity. ...read more.