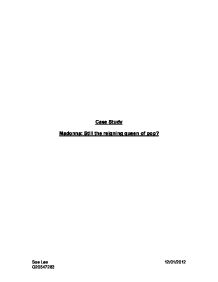 Marketing Madonna - Describe and explain the strategy being followed by Madonna in terms of the explanation of competitive strategy given in Chapter 6. Why has she experienced sustained success over the past two decades? What might threaten th

Case Study Madonna: Still the reigning queen of pop? Introduction Referring to the case study on page 251, (Exploring Corporate Strategy, Johnson, Scholes and Whittington) this report attempts to answer the following three questions; 1. Describe and explain the strategy being followed by Madonna in terms of the explanation of competitive strategy given in Chapter 6. 2. Why has she experienced sustained success over the past two decades? 3. What might threaten the sustainability of her success? 1. Competitive Strategy Madonna began her music career in 1983 and is still the reigning queen of pop in 2011. Her success can be broken down into three strategic business units; music, films and children's books. Madonna has always known which audience she is targeting. Her initial style was targeted at young 'wannabe' girls. This was given credibility by Macy's store producing a Madonna look-alike clothing range. A year later Madonna changed her image which allowed her to develop the current market as well as penetrate new areas. (Ansoff's Matrix) This time she was targeting a more grown up audience. Madonna's strategy is based on differentiation. She is more than just a singer, she is an image. Her product is better than her competitors. It stands out above the rest as superior. This strategy of differentiation is pursued by courting controversy but staying marketable enough. ...read more.

Having her own record label means that she has the physical resources that give her the freedom to develop her image how she wants. She has the financial resources to fund her own ventures, be that as a recording artist or a book writer. Her unique resource is intangible; her name. She is, to all extent and purposes the brand. Her popularity over the years has put her in the fortunate position of being able to collaborate with other, sometimes younger, top names in the industry, thus keeping her popular with the younger audience as well as with her original fan base. This also gives the opportunity to learn new skills and more modern approaches. The music industry is hypercompetitive and in order to survive in this rapidly changing environment there is a need to adapt quickly. Madonna's core competences have been difficult to imitate because they are complex. It isn't just because she is a good singer. It is more how the package is put together and marketed. She is flexible and innovative. In order for Madonna to sustain competitive advantage she has reinvented herself time and again. There has been several paradox of change starting a new 'Sigmoid Curve'. She cannibalises the bases of her success. Also, there is a cultural history of being daring. Her audience may be waiting to see what she will do next. ...read more.

If she were to lose her image perhaps younger, up and coming talent wouldn't be so keen to work with her. According to Bowman's Strategy Clock options six, seven and eight are likely to fail; > Option 6 - Increased price/standard product > Option 7 - Increased price/low value > Option 8 - low value/standard price Should the quality of the products fall or the price out weight the quality of the product customers won't buy. This would be particularly relevant to the children's books on sale or concern tickets. But it is also relevant to the quality of the music she produces or any films she may star in. We have seen in 2003 with the release of Madonna's 'American Life' album that she withdrew her militaristic image and video due to the Gulf war. This coincided with the publication of her children's book 'The English Roses'. Historically Madonna has been controversial and known which audience she was targeting. This time she was reported to be going soft and was reliant on her existing fan base. Whilst this strategy may have proved successful for the marketing of the book, the album was her lowest-selling. The image she portrays for one element of her business may be detrimental to another. Reference; Exploring Corporate Strategy, Johnson, Scholes and Whittington (2008) ?? ?? ?? ?? Sue Lea 02/12/2011 G20547283 ...read more.