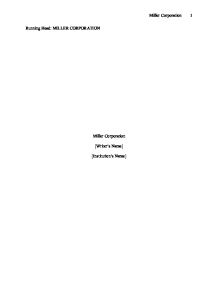 Miller Corporation Case Study. This paper shall discuss the actions Miller (the beer company) has taken to maintain profitability in times of economic downturn. It shall also develop a list of best practices, which are being used by brewing organizations

Running Head: MILLER CORPORATION Miller Corporation [Writer's Name] [Institution's Name] Miller Corporation This paper shall discuss the actions Miller (the beer company) has taken to maintain profitability in times of economic downturn. It shall also develop a list of best practices, which are being used by brewing organizations in the beer industry to respond to changes in macroeconomic factors such as GDP, unemployment, inflation and interest rates. The brewing industry has witnessed many odds against their business, namely changes in the GDP, unemployment, inflation and interest rates fluctuations. However, it has survived the test of time, and proved to withstand the challenges, which the external factors posed. ...read more.

Philip Morris' Miller Brewing Company subsidiary, in an attempt to gain market share and in the process unseat Anheuser-Busch as the number one brewer, commissioned its applied research and development area to develop a "light" beer in total secrecy. In 1978 Miller Brewing released its new "light" beer with no advance test marketing, no pre-marketing advertisements and no press releases. The entire beer industry was caught by surprise. (Carter ,2004)This coup enabled Miller Lite to beat Schlitz Light to market by one full year, and in addition allowed Miller Brewing to realize a two full year marketing advantage over Anheuser-Busch's Natural Light beer. By 1981, only three years after the Miller Lite introduction, 22 other brands of light beer were in the marketplace, but due to the consumer loyalty it gained through its early release, Miller Lite retained its leadership in the light beer category. ...read more.

These are generally followed by web marketing. All these efforts assist in supporting the product and to create slogan chanting of our product. As the name of the brewing company (e.g. Miller Lite Beer) is delivered from all these effective mediums, the target audience becomes aware of the product. The second and last step of this strategy involves revolutionizing the packing of the product. In case of Miller, they were severely criticized in late 1990s for making a non-recyclable plastic bottle for some selected products. However, they re-introduced the product to include post-consumer polyethylene teraphthalate (PET) bottles that were environmentally friendly and were easily recyclable. This socio-economic aspect of their product development assisted them in increasing their market share and creating a sense of goodwill amongst their customers. ...read more.