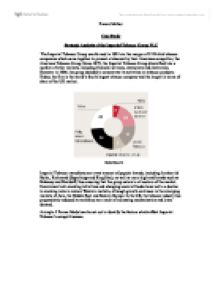 Case Study Strategic Analysis of the Imperial Tobacco Group PLC The Imperial Tobacco Group was formed in 1901 via the merger of 13 British tobacco companies which came together to prevent a takeover by their American competitor, the American Tobacco Group. Since 1973, the Imperial Tobacco Group diversified into a number of other markets, including financial services, restaurants and electronics. However in 1996, the group decided to concentrate its activities on tobacco products. Today, the firm is the world's fourth largest tobacco company and the largest in terms of share of the UK market. Global Share % Imperial Tobacco manufacturers a vast amount of popular brands, including Lambert & Butler, Richmond (Superkings and King Size), as well as more high-end brands such as Embassy and Davidoff; thus ensuring that the group caters to all sectors of the market. Government anti-smoking initiatives and changing social attitudes have led to a decline in smoking rates in mature Western markets, although growth continues in the emerging markets of Asia, the Middle East and Eastern Europe. In the UK, the tobacco industry has progressively reduced its workforce as a result of increasing mechanisation and lower demand. A simple 5 Forces Model can be set out to identify the factors which affect Imperial Tobacco's competitiveness. Porter's 5 Forces Model 1. ...read more.

results in the relative bargaining power of individual suppliers being low. The Imperial Tobacco Group can switch easily from one supplier to another, at a low cost. Since most suppliers come from poor, agricultural lands, suppliers are in large part heavily dependent on the custom of large tobacco companies to survive, thus reducing their bargaining power. In recent years, Imperial Tobacco has engaged in a strategy of 'tapered vertical integration', thereby partially integrated the company with earlier production stages; growing tobacco, providing agronomy assistance, technical support and training in places such as Morocco, Laos and Madagascar. By doing this, Imperial Tobacco is able to use the threat of growing more tobacco itself to ensure that independent suppliers do not exploit their supply position, thus further reducing their bargaining power. 4. Buyers of tobacco products include supermarket retailers, wholesalers and local grocers. Larger supermarket retailers such as Tesco, Asda or Sainsbury's, which sell a large portion of total sales of tobacco products in the UK, may be able to exert more buyer power than smaller retailers. The ban on advertisements of tobacco products (which makes it harder for Imperial Tobacco to differentiate its products) makes it is easier for powerful purchasing companies to switch to a suitable alternative product from another supplier. ...read more.

Whereas once the process of rolling cigarettes, inserting filters and packaging was done with human supervision, modern advancements mean that 14,000 cigarettes can be produced per minute and the processes of rolling cigarette paper and packaging are done quickly via machines. The large scale usage of this machinery has lowered unit-costs for Imperial Tobacco. Imperial Tobacco faces a changing business environment. Threats to the business in the immediate future include current proposals being considered by Parliament to ban the display of tobacco products in retail outlets, which would make it even more difficult for Imperial Tobacco to promote its brand8. In addition, there is currently debate amongst policy-makers to extend the ban on the sale of tobacco-products from persons under 16 to persons under 18, which would further reduce Imperial Tobacco's declining UK market. In the short term future, Imperial Tobacco's strategy should be to increase investment in technology, to further simplify the cigarette-production process and reduce costs to compensate for the effect of indirect taxation by government. In order to offset the decline in market volumes amongst Western markets, in the next few years Imperial Tobacco must set out the framework to shift its resources towards expanding its business within the emerging markets of Asia and Eastern Europe, where market volumes are growing and where there are considerable opportunities to develop their brand-name ahead of their competitors. ...read more.