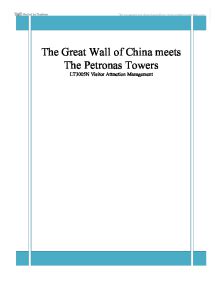 The Great Wall of China and The Petronas Towers

The Great Wall of China meets The Petronas Towers LT3005N Visitor Attraction Management As Asia in the recent past has opened itself up economically to the world through trade and business, so too has it opened up to tourism and the benefits that come with this new and ever-changing industry. More specifically, the variety of visitor attractions on offer around the world has developed significantly in the past twenty years (Stevens, 2000), especially in Asia, and is influenced by a variety of factors. This essay will examine two distinctly different yet similar visitor attractions in China and Malaysia, namely the Great Wall of China and the Petronas Towers, and appropriately analyse issues such as product development, market segmentation, transportation, and the overall business environment. By comparing and contrasting these attractions, it can be seen that they overlap continuously to give a dynamic representation of the visitor attraction market as a whole. Before delving into the history of these attractions, the term visitor attraction as it relates to the management and organisation of attractions in general must be defined. A complete definition, given by the English Tourism Council, states that "A permanently established excursion destination, a primary purpose of which is to allow public access for entertainment, interest or education; rather than being principally a retail outlet or venue for sporting, theatrical or film performances. It must be open to the public without prior booking, for published periods each year, and should be capable of attracting tourists or day visitors as well as local residents. In addition, the attraction must be a single business, under a single management... and must be receiving revenue directly from visitors."(English Tourism Council, 2000b:24) This is relevant for both destinations, with the Great Wall allowing public access for education, open without prior booking, attracting all different visitors as well as local residents, and is receiving revenue from these tourists and The Petronas Towers, which is open without prior booking, attracting international visitors as well as locals especially for shopping interests, and is owned under a single management. ...read more.

53% visit for sightseeing and leisure attractions such as the Great Wall, and in 2009, plans for visa free travel between countries could see this number greatly increase. The Japanese are especially interested in cultural attractions such as the Great Wall, with 34% visiting for this reason. (Mintel, 2010) With a largely Eurocentric industry, it is important to note the large and growing number of Asian tourists and their spending potential since they represent 30 times the international market. The demographics of travellers, can be seen to be highly mixed since the Great Wall is such a popular cultural attraction in China. Segmenting the market based on demographics, "divides the population into groups on the basis of their demographic characteristics such as age, sex, and race." (Swarbrooke, 2001:75) The data found that 90% of tourists travel in groups, which is one reason why "Great Wall" packages and tour groups are so important to the sector. The majority of international tourists coming to China are in the 25-44 age group, except for the Americas which have a larger number of older tourists within the 45-64 age group. (Mintel, 2010) This is due to the fact that China is not yet a popular destination for younger visitors from the United States due to the travel distance and associated costs. FIGURE 2: Foreign arrivals to China, by age, gender and region, 2008 (Mintel, 2010) Asia Americas Europe Oceania Africa Others % % % % % % Age Under 14 14 4 7 4 7 2 15-24 7 7 12 7 5 5 25-44 48 35 46 39 66 50 45-64 35 42 34 40 26 38 Over 65 5 8 4 7 1 5 Gender Male 68 64 55 62 75 60 Female 32 36 45 38 25 40 Along with China and the growth of tourism both internationally and domestically, so too has Malaysia opened up to different tourism markets. ...read more.

Before the Chinese government continues to build year after year further attractions surrounding the Great Wall, they must constantly be aware that the Great Wall is firstly a heritage site and funding and development should reflect that fact. This has already been brought to the Chinese government's attention with the closing of Simatai for renovations and the development of further attractions. The negative impacts on the local businesses and cultures have been great, which has drawn attention to the government of their responsibilities to locals and the social impacts of tourism attractions. (Lu, 2010) Since the Petronas Twin Towers have always been located in the heart of the city of Kuala Lumpur, they satisfy their customers with their accessibility, price point, and variety of offers within the Towers as well as in the surrounding area. Their challenge in the future will be attracting international arrivals to Kuala Lumpur, since currently with the economic crisis in the Western nations, international arrivals have dropped off. As well, the Petronas Towers must continue to better suit the needs of the domestic tourist, which has already been shown through the variety of offers including meals atop the Towers, as well as linking with other attractions nearby such as the Suria KLCC. After delving into the respective products, markets, transport and business environment of these two attractions, a trend can be seen towards focusing on and improving the infrastructure for domestic tourism, as it is becoming the leading market in both countries. As well, it should be noted that both the Great Wall and the Petronas Twin Towers must continue to evolve to suit the needs of their visitors while maintaining the integrity of their respective attractions, which has shown more difficult than first imagined with commercialism taking its toll. As well, with a new focus on sustainability and the natural environment, both attractions need to balance these issues with economic growth and development. Until then, hopefully both countries can float on their domestic tourist markets until the economic crisis in the West has been resolved. ...read more.