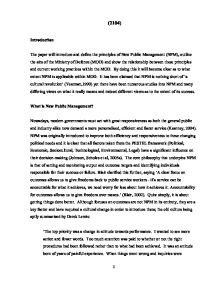 The paper will introduce and define the principles of New Public Management (NPM), outline the aim of the Ministry of Defence (MOD) and show the relationship between these principles and current working practices within the MOD. By doing this it will bec

(2104) Introduction The paper will introduce and define the principles of New Public Management (NPM), outline the aim of the Ministry of Defence (MOD) and show the relationship between these principles and current working practices within the MOD. By doing this it will become clear as to what extent NPM is applicable within MOD. It has been claimed that NPM is nothing short of 'a cultural revolution' (Yeatman,1990) yet there have been numerous studies into NPM and many differing views on what it really means and indeed different views as to the extent of its success. What is New Public Management? Nowadays, modern governments must act with great responsiveness as both the general public and industry alike now demand a more personalised, efficient and faster service (Kearney, 2004). NPM was originally introduced to improve both efficiency and responsiveness to these changing political needs and it is clear that all factors taken from the PESTEL framework (Political, Economic, Sociocultural, Technological, Environmental, Legal) have a significant influence on their decision-making (Johnson, Scholes et al, 2005a). The core philosophy that underpins NPM is that of setting and monitoring output and outcome targets and identifying individuals responsible for their success or failure. ...read more.

for money for defence is a key part of our responsibilities, and the best possible reassurance to the public, who bear the cost of defence - of our proper and wise stewardship of the resources provided.' (Heseltine, 1984) Relationship between the principles of NPM and the MOD * Management Systems move towards outcomes and outputs. * Shift towards measurement and quantification. These principles above can be grouped together because in essence they both establish 'what service is achieved, rather than how it is achieved' and the measurement of this service. These principles are fundamental to success and have been successfully implemented into the MOD already by use of the Balanced Scorecard. The Defence management Board identified that a robust performance management regime was key to long-term success (MOD, 2004). As a result of this they developed and introduced the Balanced Scorecard; a concept originally created by Drs Robert S Kaplan and David P Norton. This has since been refined and developed and now has thirteen strategic objectives and twenty-five associated performance measures and has also led to the creation of the MOD strategy map. Source: Managing Organisational Performance in the (United Kingdom) Ministry of Defence, 2004. Figure 3 represents the developing MOD Balanced Scorecard objectives. ...read more.

Additionally Resource Accounting and Budgeting (RAB) has been gradually introduced to the MOD allowing the MOD to focus more clearly on its key cost drivers (MOD, 2003c). Conclusion It is clear that military capability can only be enhanced through the use of strong and effective management of defence. It is also absolutely clear that the MOD has embraced all of the key principles of NPM in their entirety but it is the continuance of this programme that will achieve the culture change required for added success. As with any organisation the proof of success is measured by results, but these, within an organisation as large and diverse as the MOD can be difficult to evaluate. To evaluate something effectively there must be a mechanism to make before and after comparisons; again something that may not be achievable now within the MOD (Pollitt, 2003). It is however, not the success or failure of NPM that is being argued, it is simply whether or not these principles can be applied to the MOD. I would argue not only that they could be applied to the MOD but also that all of the currently defined principles are being applied to the MOD now and most are working. I would conclude that the principles of NPM are fully applicable to the MOD. ...read more.