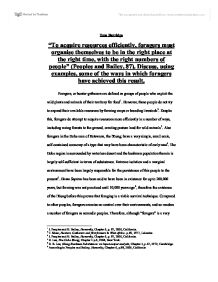 &quot;To acquire resources efficiently, foragers must organise themselves to be in the right place at the right time, with the right numbers of people&quot; (Peoples and Bailey, 87). Discuss

Tom Burridge "To acquire resources efficiently, foragers must organise themselves to be in the right place at the right time, with the right numbers of people" (Peoples and Bailey, 87). Discuss, using examples, some of the ways in which foragers have achieved this result. Foragers, or hunter-gatherers are defined as groups of people who exploit the wild plants and animals of their territory for food1. However, these people do not try to expand their available resources by farming crops or breeding livestock2. Despite this, foragers do attempt to acquire resources more efficiently in a number of ways, including razing forests to the ground, creating pasture land for wild animals3. Also foragers in the Dobe area of Botswana, the !Kung, have a very simple, small scale, self-contained economy of a type that may have been characteristic of early man4. The Dobe region is surrounded by waterless desert and the bushman population therein is largely self-sufficient in terms of subsistence. Extreme isolation and a marginal environment have been largely responsible for the persistence of this people to the present5. Homo Sapiens has been said to have been in existence for up to 200,000 years, but farming was not practiced until 10,000 years ago6, therefore the existence of the !Kung before this proves that foraging is a viable survival technique. Compared to other peoples, foragers exercise no control over their environments, and so renders a number of foragers as nomadic peoples. Therefore, although "foragers" is a very broad term, the statement that foragers must be in the right place at the right time to acquire resources efficiently is an accurate analysis of the situations of many hunter-gatherer societies. ...read more.

Most foragers are seasonally mobile, and must be to survive in the hostile environment19. None of the earth's environments offer the same kinds and quantities of resources all year round. There may be seasonal differences in rainfall, and, outside the tropics, there are often marked differences in temperature. Ordinarily, game animals are available in some places and not in others, at different times of year, as are fruits and nuts. Therefore, in order to survive efficiently, both hunters and gatherers must be in the right place at the right time. The foragers must migrate to where sustenance is both easy to obtain and in abundant supply during a certain time period or season. A good example of this is with the Hadza people of Tanzania, who survived in an arid and dry region, with marked distinctions between the wet and dry seasonal periods. In rainy months the Hadza moved to the temporary waterholes that opened up, much like the !Kung, living on the animals and plants in the area20. At another time of year, when seasonal variations render these waterholes dry, the Hadza moved into much larger camps around the much larger and permanent water sources21. Therefore, the hunter-gatherers must be in the right place at the right time for efficient foraging. Also, to exploit plants and animals effectively and efficiently, most foragers vary the sizes of their living groups, according to the availability of food sources for the tribes according to the variations in seasonal climatic conditions22. Thus it is most efficient for small groups to co-operate in the search for food and water. ...read more.

at the right time with not only the right number of people, but the right type of people in gender and age. To sum up, most hunter-gatherers develop certain ways of organising their activities that help their adaptation. Firstly, there is a high division of labour based on gender and age. Secondly, there is a large degree of mobility in the existence of the tribes, especially between seasons. Thirdly, there is a congregation and dispersal of groups, again on a seasonal basis. Fourthly, there are living groups of small bands with varying size and flexible composition. Fifthly, there are strong values of reciprocal sharing and of equality of personal possessions and social status. Finally, there is a loose attachment of people to territory and flexible rights to resources27. Although these statements describe most gathering communities, I believe that the statement is not universal. I believe that "foragers" is a very diverse term, and different cultures exhibit the features to varying degrees. To prove this, a study of the Native Americans on the northwest coast of North America, who have abundant food resources - especially fish - is useful as evidence. Because of the abundance of food and the ability of the natives to smoke and preserve food for a number of months, there was no need for seasonal mobility, nor the need to live in small groups28. Therefore, although the statement is applicable for a number of hunter-gatherer groups, particular groups were more definitely associated with particular locations than were people such as the Shoshone or !Kung, and thus, the statement is not completely comprehensive. ...read more.