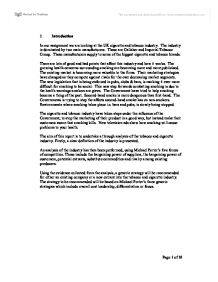 1 Introduction In our assignment we are looking at the UK cigarette and tobacco industry. The industry is dominated by two main manufacturers. These are Gallaher and Imperial Tobacco Group. These manufacturers supply to some of the biggest cigarette and tobacco brands. There are lots of good and bad points that affect this industry and how it works. The growing health concerns surrounding smoking are becoming more and more publicised. The existing market is becoming more valuable to the firms. Their marketing strategies have changed as they compete against rivals for the ever decreasing market segments. The new legislation that is being enforced in pubs, clubs & bars, is marking it ever more difficult for smoking to be social. This new step forwards combating smoking is due to the health warnings smokers are given. The Government have tried to help smoking become a thing of the past. Second-hand smoke is more dangerous than first-hand. The Governments is trying to stop the affects second-hand smoke has on non-smokers. Environments where smoking takes place i.e. bars and pubs, is slowly being stopped. The cigarette and tobacco industry have taken steps under the influence of the Government, to stop the marketing of their product in a good way, but instead make their customers aware that smoking kills. New television ads show how smoking will cause problems to your health. The aim of this report is to undertake a through analysis of the tobacco and cigarette industry. Firstly, a clear definition of the industry is presented. An analysis of the industry has then been performed, using Michael Porter's five forces of competition. These include the bargaining power of suppliers, the bargaining power of customers, potential entrants, substitute commodities and rivalry among existing producers. Using the evidence collected from the analysis, a generic strategy will be recommended for either an existing company or a new entrant into the tobacco and cigarette industry. ...read more.

This is because some manufacturers have used the money previously spent on advertising to lower the price of cigarettes resulting in more being purchased. The cigarette and tobacco industry has been operating for decades. Its product life-cycle has reached the maturity stage and shows no indication of altering. However, this may begin to change in the future as the increase in anti-smoking groups and pressure by the government comes into force. The introduction of a ban to smoking in public places may reduce the amount of smokers as smoking becomes more unsociable. This may begin the de-maturity of tobaccos product-life-cycle as demand decreases. The cigarette and tobacco industry is an example of an oligopoly as the market is dominated by two main manufacturers. Imperial Tobacco holds the largest market share at 53.7%, followed by Gallaher at 36.8%. Rothams hold a small market share at 6%. Source: Mintel, 2004 Gallaher was the market leader in the UK for many years, but in recent years it has concentrated on international sales. In 1999 Gallaher acquired Austria Tabak and Ligget-Ducatt increasing its international sales. Another major step in the increase of international sales was the signing of a deal with Chinese state tobacco monopoly to market it cigarettes in China. International sales now counted for 87.3% of Gallaher's sales in 2003, up from 38% in 1998. Gallaher have also been concentrating on their interests in the UK market, in 1999 they horizontally merged RJ Reynols from RJR-Nabisco Corporation and acquired UK distribution rights of Camel and More. Imperial Tobacco are the leaders in the UK cigarette industry. They have increased their market share by the acquisition of UK distribution rights for Phillip Morris International's brands. In 2002 their market share rose to 42.9% and climbed further to 44% in 2003. In 1997 they purchased the company Rizla, which produces cigarette papers this shows an example upstream vertical integration. ...read more.

As the product it is producing is meant for the buyer to eventually give up cigarettes altogether. One option to compensate for this is for the new company to invest in a different industry completely for example sports and leisure. The aim of this strategy is for the customer having given up cigarettes to continue their spending on fitness regime in gyms and other leisure facilities. To encourage this the final lowest nicotine, green packaged cigarettes could include an incentive voucher to collect towards discounts in the sports and leisure facilities owned by the new company. This is an example of conglomerate diversification. 5 Conclusion To conclude, the analysis of the tobacco and cigarette industry has shown that it is an oligopoly industry with the UK market being dominated by two main firms, Imperial Tobacco and Gallaher. These firms have a large influence over the barriers of entry set in the industry due to price fixing. The tobacco industry is on the decline due to increased awareness of the health risks associated with it, and also the ban on advertising and marketing in the UK. However, due to the increase in smuggling of cigarettes into the UK it is very hard to record the actual figures of the consumption of cigarettes. The suppliers to the tobacco industry have very little power over the prices they set due to the tobacco manufacturers being large organisations who can demand the price they pay. The customers to the tobacco industry have some power over the manufacturers by demanding lower price cigarettes; this has allowed a boom in low-cost sector of the tobacco industry. The barriers to entry into the tobacco industry are very high. A new entrant would find in difficult to break into the market. This is why it has been recommended that a new entrant uses Michael Porter's differentiation strategy to develop its product. It has been suggested that the new entrant developed a product that allows users to slowly give up smoking. This would hopefully allow for relaxation on advertising restraints and approval from anti-smoking groups. ...read more.