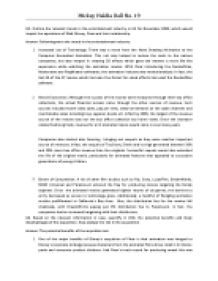 ﻿Mickey Haldia Roll No. 19 ________________ Q1. Outline the relevant trends in the entertainment industry in US for November 2005, which would impact the operations of Walt Disney, Pixar and their relationship. Answer: Following were the trends in the entertainment industry: 1. Increased use of Technology: There was a move from the Hand Drawing Animation to the Computer Generated Animation. This not only helped to reduce the costs to the various companies, but also helped in creating 3D effects which gave the viewers a more life like experience while watching the animation movies. With Pixar introducing the RenderMan, Marionette and RingMaster softwares, the animation industry was revolutionalized. In fact, the last 44 of the 47 movies which had won the Oscars for visual effects had used the RenderMan software. 1. Movie Economics: Although the success of the movies were measured through their box office collections, the actual financial success came through the other sources of revenue. Such sources included home video sales, pay per view, video-on-demand on the cable channels and merchandise sales including toys, apparel, books etc. Infact by 2005, the largest of the revenue source of the movies was not the box office collection but home video. Since the character related had long trails, revenue for a hit animated movie would come in over many years. Companies also started also focusing bringing out sequels as they were another important source of revenues. Infact, the sequels of Toy Story, Shrek and Ice Age generated between 30% and 90% more box office revenue than the originals. Successful sequels would also extended the life of the original movie, particularly for animated features that appealed to successive generations of young children. 1. ...read more.

Intergration involves the adoption of common managment and financial control systems, the joining together of operations from the acquired and the acquiring company, the establishment of bureaucratic mechanisms to share information and personnel and the need to create a commonn culture. But as experience has shown, this is more easier said than done. Additionally, post an acquisition, many acquired companies experience high managament turnover because their employees do not like the acquiring company?s operating ways ? its structure or its culture. So if Jobs or Lasseter left Pixar, it would be possible that all the critical talent goes with them. Hence, Disney should gaurd itself against such a scenario. 2. Companies generally tend to over-estimate the potential economic benefits from the acquistion. Disney should perform a complete analysis of the fiancial gains its looking at by acquiring Pixar. Already, Deutsche Bank speculated that Disney could make 65 sequels to the Pixar hits for the proposed $6.5 Billion purchase price of Pixar. 3. Acquisitions tend to be very expensive. If Disney does purchase Pixar, it would have to pay an enterprise value fee between $6.5 Billion and $7.4 Billion, given that Pixar?s market capitalization is $5.9 Billion. Additionally, analysts believed that the aquisition would be too expensive for Disney. The projected P/E ratio for Pixar was 46. Its nearest rival, DreamWorks P/E was in the 30s range. If Disney went ahead with the acquisition, it would be nonsensical because it would be heavily dilutive with Disney trading a P/E of 17. Additionally, if the creative talent at Pixar walked out, Disney would have bought the most expensive computer ever sold. ...read more.

Also this is useful for cross border reach. Though the risk of dissipating industry know how exists, given the proprietary nature and highly skilled resources of Pixar in computer generated animation, such spill over can be easily contained. If the industry in which the acquired company participates has the potential to remain profitable, then the target passes the industry attractiveness test. Disney & Pixar?s synergy has produced smashing hits in the box office. Disney has a deep pocket and Pixar has a huge talent base. Pixar is a large player in the industry in terms of developing and producing computer animation and Disney has positioned itself strongly as a family entertainment company .The combination of these two companies will be very difficult to imitate. Thus the combination of Disney and Pixar will result in a little stabilization where competitors will not like to target them . Hence it would reduce the rivalry. Bargaining power of the Buyer is low in this industry. Due to the advent of so many ways to watch a movie it is almost certain that the interested viewer will watch the movie. Also because of Disney theme parks etc, there will be constant exposure towards the movie. Threat of Substitutes will be low. Substitute products can be theatre or other forms of entertainment. But these forms cannot match up to the appeal it creates in the general mass. Threat of new entrant is high in animation industry due to cheaper technological products. But when the acquisition takes place finding the talent will be tough because as a strong brand, the Disney-Pixar combination will attract more talent. Hence, the merger will increase the attractiveness in the industry. ...read more.