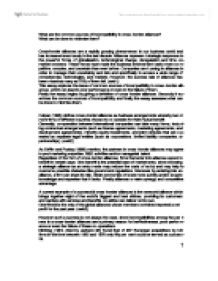 What are the common sources of incompatibility in cross-border alliances?

What are the common sources of incompatibility in cross-border alliances? What can be done to minimise them? Cross-border alliances are a rapidly growing phenomenon in our business world and has increased enormously in the last decade. Alliances represent strategic responses to the powerful forces of globalisation, technological change, deregulation and time-to-market concerns. These forces have made the business environment vastly more competitive, complex, and uncertain than ever before. Companies are turning to alliances in order to manage their uncertainty and risk and specifically to access a wide range of competencies, technologies, and markets. However, the success rate of alliances has been mixed-as many as 70% of them fail. (web1) This essay explores the issue of common sources of incompatibility in cross-border alliances, which can lead to poor performance or even to the failure of them. Firstly the essay begins by giving a definition of cross-border alliances. Secondly it examines the common sources of incompatibility and finally the essay assesses what can be done to minimise them. Culpan (1993) defines cross-border alliances as business arrangements whereby two or more firms of different countries choose to co-operate for their mutual benefit. Generally, co-operation between international companies can take many forms, including contractual arrangements (such as license agreements, marketing agreements, and development agreements), minority equity investments, and joint ventures that are operated as separate legal entities (such as corporations, limited liability companies, or partnerships). (web2) As Griffin and Pustay (1999) mention, the partners in cross-border alliances may agree to pool marketing expertise, R&D activities and/or managerial talent. Regardless of the form of cross-border alliances, firms that enter into alliances expect to benefit in certain ways. One benefit is the potential ease of market entry, since choosing a strategic alliance as an entry mode may reduce the costs of entry and may help to overcome possible obstacles like government regulations. Moreover by entering into an alliance, a firm can share its risk, obtain economies of scale more quickly and/or acquire knowledge and expertise that it lacks. ...read more.

These nations have a well-defined social network, including extended families or tribes. People are expected to put the good of the group ahead of thinking on their own welfare or success. Most Asian, Latin American, and West African nations tend to be collective whereas people in the U.S., the United Kingdom, Australia, Canada, New Zealand and the Netherlands are said to be individualistic. As frequently pointed out, the individualistic character of the U.S. society makes it difficult for U.S. corporations and executives to feel comfortable with the collaborative behaviour that is a basic element of most Asian countries. Many of the cultural incompatibilities in international business, and especially in international alliances, are a consequence of one partner being from a more individualist society and the other being from a society that is more collectivist. Hofstede identified also a dimension called uncertainty avoidance. This dimension reflects the degree to which ambiguity causes anxiety in a society. People in cultures characterised by a higher uncertainty avoidance seek to reduce ambiguity and feel uncomfortable in unstructured situations. They prefer a structured and routine, even bureaucratic way of doing things. Hofstede found that many people in Germany, Austria, France, Italy or Japan tend to avoid uncertainty. People in cultures characterised by a low uncertainty avoidance look at ambiguity as a context within which an individual can grow or develop and carve out new opportunities. Hofstede suggests that many people from the United States, Denmark, Sweden or Hong Kong are uncertainty accepting. Accordingly, Griffin and Pustay (1999) mention that countries like Germany have the emotional need for rules and formalisation at their workplace, whereas American firms mostly dislike rules and standardisation. In this example, two different attitudes on uncertainty avoidance are clashing and it gets evident, that problems might arise within an alliance of which the members are coping with uncertainty in a different manner. The fourth cultural dimension, masculinity with its opposite part femininity, expresses "[...]the extend to which the dominant values in society are assertiveness, money, and material things, not caring for others, quality of life and people." ...read more.

these differences are, but without a broader contextual understanding of national values the explanation why there are differences can never be answered. (Cartwright and Cooper, 1996) In conclusion it can be said, that the essay shows the existence of different approaches in order to analyse the sources of incompatibility in cross-border alliances. In the traditional way of analysing them, people focused their attention on rational-economic factors. But as Kitsching (1967, cited by Cartwright and Cooper 1996) says, "[...] the mere existence of potential synergism is no guarantee that the combined operation will realise the Potential. " That is to say, that entering into an alliance by just looking at economic-rational factors is no guarantee for success. Cartwright and Cooper (1996) emphasise this issue by using an illustrative comparison. They say that conceptualising an alliance exclusively as a rational financial and strategic activity is "[...] like buying a house when one is satisfied as to price, title, location and structure, without inspecting the interior; then, having moved in, finding oneself uncomfortable with the layout and irritated by the eccentricities of the workings of the central heating system." This comparison reveals that the common sources of incompatibility in a cross-border alliance is represented by different cultures of the partners within an alliance. Since culture affects the way of decision making, the management style and other parts of the organisational culture, numerous problems or "incompatibilities" might arise and harm the performance of the alliance. These arising incompatibilities can be explained and analysed by using Hofstede`s and Hall�s framework of national culture. As a possibility to minimise this harming sources of incompatibility, the partners within an alliance have to be aware of the impact of their own culture in order to understand the cultural differences of the others. This cultural understanding can be taught by training and consequently helps to minimise the incompatibilities, on the one hand, and maximises the synergy effect of the alliance, which is the key of a winning cross-border alliance, on the other hand. ...read more.