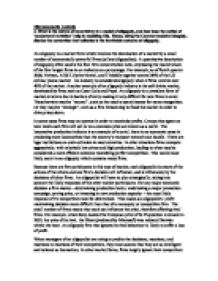 What is the nature of uncertainty in a model of oligopoly, and how does the notion of conjectural variation help in modeling this. Hence, using the Cournot model of duopoly, discuss the contention that collusion is the inevitable outcome o

Microeconomic Analysis 3. What is the nature of uncertainty in a model of oligopoly, and how does the notion of 'conjectural variation' help in modeling this. Hence, using the Cournot model of duopoly, discuss the contention that collusion is the inevitable outcome of oligopoly. An oligopoly is a market form which involves the domination of a market by a small number of economically powerful firms (sellers/oligopolists). A quantitative description of oligopoly often used is the four-firm concentration ratio, expressing the market share of the four largest firms in an industry as a percentage. For example, as of fourth quarter 2008, Verizon, AT&T, Sprint Nextel, and T-Mobile together control 89% of the US cellular phone market. An industry is considered oligopoly when 4 firms control over 40% of the market. Another example of an oligopoly industry is the soft drinks market, dominated by firms such as Coca-Cola and Pepsi. An oligopoly is a prevalent form of market structure due to barriers of entry making it very difficult for new firms to enter. These barriers may be "natural", such as the need to spend money for name recognition. Or they may be "strategic", such as a firm threatening to flood the market in order to drive prices down. ...read more.

* Firms ignore their interdependence and believe dqB/ dqA = 0 and dqA/ dqB = 0, this is known as zero conjectural variations. Zero conjectural variation is only true in the equilibrium. "Consider a simple duopoly game, first analysed by Cournot (1838). We suppose that there are two firms who produce an identical good at zero cost. Each firm must decide how much output to produce without knowing the production decision of the other duolopolist. If the firms produce a total of x units of the good, the market price will be p(x); that is, p(x) is the inverse demand curve facing these two producers." (Varian, H. (1992) Microeconomic Analysis. 3rd edition. New York: W. W. Norton & Company.) In this model a reaction function is constructed for each firm, these show how much a firm will produce as a function of how much it thinks the other firm will produce. A's reaction function tells us A's profit-maximising output level given any output produced by B, whereas B's reaction function tells us B's profit-maximising output level given any output produced by A. Equilibrium occurs at points qB* and qA*, which are consistent with both reaction functions. ...read more.

They must decide whether to compete aggressively or passively with their competitors. Competing aggressively means they attempt to capture the larger share of the market compared to their competitor. However if both firms compete passively, limiting output and setting higher prices, higher profits will be made. Like in the prisoners, each firm has the ability to undercut its competitor, and each firm will know that its competitor has the same incentive. Hence although the outcome of co-operation may be desirable, the firms cannot trust each other as there is always the possibility of one of the firms lowering their prices to seize the majority of the market share. As mentioned earlier it is illegal in most countries to agree to collude. Organisations such as the Competition Commission have been introduced to prevent collusive behaviour by investigating mergers, markets and other enquiries related to regulated industries under competition law in the United Kingdom. It is seen that by colluding, the consumer will lose out. Price is much higher, and production is less than in the Stackelberg and Cournot model. It is seen to be better to minimise the aggregate producer and consumer surplus, rather than to give the producer an advantage. On the other hand, the large quantity of legislation that restricts collusion would surely not exist if it was not for the strong likelihood of it happening. ...read more.