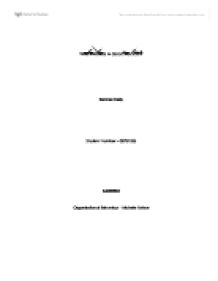 What Makes A Good Leader?. In this assignment I intend to explore some of the aspects related to effective leadership within an organisation.

What Makes A Good Leader? Damien Kelly Student Number - 08751536 BAHHRD2 Organisational Behaviour - Michele Kehoe In this assignment I intend to explore some of the aspects related to effective leadership within an organisation. It could be argued that good leadership, in the times we are in, is essential for an organisation to remain competitive and indeed essential for its survival. When we think of leaders it conjures up images of famous political leaders like Barack Obama, Winston Churchill and social leaders like Ghandi, Martin Luther King and indeed, notorious leaders like Hitler and Stalin from the 1930's. This assignment will also examine some of the main concepts and theories put forward as to what exactly leadership is. A common word we will see associated with leadership is influence. Leadership is essentially the influence exerted over people through effective communication in order to reach specified attainable goals. Tannenbaum et al. (1961) define Leadership as "an interpersonal influence that is exercised in a situation and directed through the communication process towards the attainment of a specified goal." Many theories and concepts abound which will now be examined in detail throughout this paper. The earliest studies carried out in order to establish written theories and work in the area of leadership include that of the Trait Theories. Essentially this theory focused on the actual behaviours and characteristics of a subject to determine if these traits conformed to the theory that leaders were born not made. ...read more.

It is an important step to further establish the specific behaviours that exist in leaders compared to non-leaders. Essentially behavioural theories suggested that leaders could be moulded by identifying the specific behaviours rather than the traits required and to teach potential leaders to exhibit these behaviours. A closer look at some of the studies conducted, including the Ohio State University leadership Study, which was an important milestone in leadership research, suggested that there were two critical characteristics possessed of which either could be higher or lower which were dependent on each other. In order to assess the subordinates perceptions of their leaders, Behavioural Scientists developed a questionnaire which was conducted in both a military and industrial setting. These characteristics are consideration and initiation structure. Leaders high in initiating structure style and high in consideration style were generally more likely to achieve superior performance among their followers. Pictured below is the Four Leadership Styles established as part of the Ohio State University Leadership Studies Ohio State University Leadership Study. Four Leadership Styles. Another established theory in relation to leadership is the Contingency Theory which examines the relationship between the leader and the actual situation the leader finds them in. Fiedler introduced a number of studies in the 1970's regarding the leadership of teams and workgroups in what was known as the emergence of situational leadership models through his LPC models. ...read more.

It can be argued that effective leadership will be paramount moving forward in ever increasing social media dominance. It has the ability to influence people on a mass scale and to engage people in debate and for a generation the preferred form of communication. The most notable of late being the emergence of social movements online being a contributing factor to the political upheaval in North African countries. This is where a challenge lies for leaders. For an organisation they are going to be heavily marketing on the internet and recruitment will also be online. Where is the future of leadership? Ultimately it will be situational leadership. Leaders will have to adapt and change due to globalisation. A good example of this is the successful businessman Denis O'Brien who has to change his leadership style depending on his location. Where is the leadership in Libya one could ask? A situation has developed which reeks of incompetent leadership from those in government and not listening to the message coming from the people, or perhaps ignoring it. Effective leadership figure is Alex Ferguson who has had the arduous task of steering one of the most successful clubs in the world for over 20 years. Closer to home one can look to the utter failure personified in leadership of Brian Cowen and his government. In times where the public were demanding communication it was not forthcoming in relation to Anglo-Irish Bank, the IMF and the bank guarantees to name but a few. This is a time for leaders, as uncertainty abounds. ...read more.