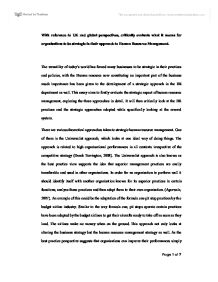 With reference to UK and global perspectives, critically evaluate what it means for organisations to be strategic in their approach to Human Resource Management.

With reference to UK and global perspectives, critically evaluate what it means for organisations to be strategic in their approach to Human Resource Management. The versatility of today's world has forced many businesses to be strategic in their practices and policies, with the Human resource now constituting an important part of the business much importance has been given to the development of a strategic approach in the HR department as well. This essay aims to firstly evaluate the strategic aspect of human resource management, exploring the three approaches in detail. It will then critically look at the HR practices and the strategic approaches adopted while specifically looking at the reward system. There are various theoretical approaches taken to strategic human resource management. One of them is the Universalist approach, which looks at one ideal way of doing things. The approach is related to high organisational performances in all contexts irrespective of the competitive strategy (Derek Torrington, 2008). The Universalist approach is also known as the best practice view supports the idea that superior management practices are easily transferable and used in other organisations. In order for an organisation to perform well it should identify itself with another organisation known for its superior practices in certain functions, analyse these practices and then adapt them to their own organisation. ...read more.

However, problems can arise when using performance related pay as it can be difficult to determine which bundle is linked to the measurement of the performance and pay scale (Agarwala, 2007). The resource based perspective is believed to be overstated by Storey (2007) as it pays too much emphasis on the roles played by knowledge, resources and organisational capabilities while playing down the broader influences of strategic choice, change and innovation. In order for a firm to survive in today's competitive environment it has to link its HR practices to the business strategy in one way or the other and any company is as good as its workforce, which needs to be kept satisfied through a range of incentives. These incentives according to the 'old pay' methods use to be limited to monetary terms coupled with planned career progression, which was better suited argued by some to Taylor's hierarchical structure in the times of predicated changes. The 'new pay' system which is argued is better suited for today's turbulent world, where organisational changes are of the norm. The new pay is based on the 'best fit' or better known as the contingency approach, as it focuses to be aligned with the business strategy. According to Lawler business strategies require to achieve certain employee behaviour and attitudes which can easily be attained through reinforcing certain pay policies. ...read more.

Even though the reward system along with its new pay management is an American developed idea with the American corporations in mind as the recipients. There has been some evidence of it being used in British organisations as well through its implications at the work place (Heery, 1996). This essay hopes to have shown the use of strategic human resource management practices and approaches in the light of the UK and global perspective. It critically evaluated the various approaches of 'best practice', 'best fit' and 'the resource bases view' used in strategic HR practices. It looked at the various drawbacks of each of the strategic approaches. It further on aimed to critically evaluate the system of rewards as part of the strategic HR practices and policies. It critically looked at rewards being used by organisations as of exploiting their employees. It is further criticised for not being a complete innovative or new approach to the reward system. The 'best-fit' and ' the best practice' models are also used in context to the reward system, with a critical analysis conducted on which approach is the most appropriate one to be used, coming to the conclusion that the new pay system is an effective way of a strategic reward system which needs to be used in the light of both a universalist approach as well as a contingency approach. ...read more.