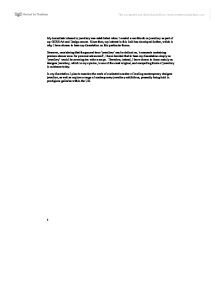 My immediate interest in jewellery was established when I created a workbook on jewellery as part of my GCSE Art and Design course. Since then, my interest in this field has developed further, which is why I have chosen to base my dissertation on this particular theme. However, considering that the general term 'jewellery' can be defined as, 'ornaments containing precious stones worn for personal adornment', I have decided that to base my dissertation simply on 'jewellery' would be covering too wide a scope. Therefore, instead, I have chosen to focus mainly on designer jewellery, which in my opinion, is one of the most original, and compelling kinds of jewellery in existence today. In my dissertation I plan to examine the work of a selected number of leading contemporary designer jewellers, as well as explore a range of contemporary jewellery exhibitions, presently being held in prestigious galleries within the UK. J CHAPTER ONE Before launching into designer jewellery I have decided first of all to examine briefly the history of jewellery, because indeed many of today's contemporary jewellery designs depict inspirations from the past. The history of jewellery covers over several thousand years of civilisation, and begins with that of the ancient World. It was during this period, that techniques such as granulation and modelling of tools were first practised by groups such as the Etruscans and the Hellenistic Court Jewellers, who also mastered the art of modelling human figures. Materials used within this period were predominantly gold, as well as the frequent use of enamels of various colours, particularly green and blue among the Hellenistic jewellers. A trip the Victoria and Albert museum, London, in June 1999 gave me the opportunity of viewing some examples of Ancient World jewellery, including jewels belonging to both the Cypriot and Hellenistic period. Unfortunately, the photographs that I took did not develop very well because of the glassy reflections produced by the protective glass casing surrounding the jewellery displays. ...read more.

Most of Pauline's work is commissioned by individuals as one off pieces, but she also does repairs, and remakes old or unwanted jewellery. The materials she uses in production include silver, nine and eighteen carat gold, and platinum, each with precious gemstones and diamond insets. Generally, a lot of Pauline's work is in contemporary styles, but occasionally she uses traditional styles if specified as preferable by the customer. As regards her inspirations, Pauline admitted quite openly that she was no longer sure where they came from. She did say however, that at University she based her thesis and final year project on contemporary tattoo designs. Perhaps some of her most recent designs have subconsciously derived from that, although the jewellery she makes now is much more refined and conservative than before. This is essentially due to the fact that customers spending money on precious metals and gemstones want high quality and durable pieces that won't go out of fashion, consequently preventing her designs from being too flamboyant. Additionally, Pauline said that she likes to look upon her new designs as a progression from previous pieces; she feels that she learns something new with every piece she makes and so this new idea is always infiltrated into her next piece in some way or another. Despite this comment however, she admitted that every now and again she does have a tendency to run out of ideas. On these particular occasions she finds that it is best for her to go out and look around and about for fresh inspirations. She feels that very often architecture holds the key to new ideas, because of the wide variation of magnificent designs and patterns there are to choose from. Before closing the interview, I decided to ask Pauline on e final question relating to her future aspirations as a professional jeweller. Her response to this specific question was one of uncertainty - she said that without a doubt it was a very difficult question for her to answer, ...read more.

Furthermore, at the museum, I was given permission to take photographs of the jewellery, and one of the attendants was able to give me a detailed commentary on the origin of the jewellery. The attendant told me that most of the jewellery on display was the gift of Mrs Anne Hull Grundy, who, from the late 1970s until her death in 1982 had sent the Ulster Museum each piece of jewellery from her collection. Anne Hull Grundy had actually been an art historian who had specialised in jewellery studies, which is the principal reason why she had started to collect jewellery in the first place. She had collected mostly non-precious jewellery, which was inexpensive at the time, but is now much more valuable due to its popularity. As I have already mentioned above, the collection includes jewellery ranging from the 16th century onwards, with the most extensive range from the 19th century, including what some people believe as the best existing collection of Irish jewellery. However, my personal favourites included jewellery from the later Arts and Crafts, and Art Nouveau movements. In my opinion, the examples of jewellery on display from these two movements were much more interesting than the jewellery from previous periods, due to the fact that they tended to reflect styles and tastes belonging to the current contemporary movement, the movement in which I am particularly interested in. CONCLUSION Having completed all my research, involving a wide range of aspects related to designer jewellery, I feel as if I have more than fulfilled my initial aim, which was to gain a more 'solid' knowledge and appreciation of designer jewellery. Throughout the dissertation I became increasingly aware of how contemporary jewellery is undoubtedly linked to jewellery of previous movements, and by examining the work of two contemporary jewelers I feel that I have developed an insight into both their inspirations and individualistic creativity. Furthermore, through exploring various galleries' exhibitions of contemporary jewellery, I feel that I am now much more aware of the increasing demand for designer jewellery in today's society. ...read more.