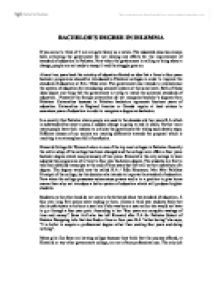 BACHELOR'S DEGREE IN DILEMMA If you come to think of it we are quite funny as a nation. The educated class has always been criticizing the government for not making any efforts for the improvement of standard of education in Pakistan. Now when the government is willing to bring about a change, people are not ready to accept it and the struggle goes on. Almost two years back the ministry of education floated an idea that a three to four years bachelor programme should be introduced in Pakistani colleges in order to improve the standard of education at B.A / B.Sc level. The government also intends to revolutionise the system of education by introducing semester system at the same level. Both of these ideas depict one thing that the government is trying to match the universal standards of education. Presently the foreign universities do not recognize bachelor's degrees from Pakistani Universities because in Pakistan bachelors represents fourteen years of education. Universities in England America or Canada require at least sixteen to seventeen years of education in order to recognize a degree as bachelors. In a country like Pakistan where people are used to the decades old two years B.A which is substandard but easy to pass, a sudden change is going to end in chaos. Further more many people have their reasons to criticize the government for taking such drastic steps. ...read more.

Students who come from an A level background have a different view point. They think that the present system despite many flaws is better than the previous one. Qudsia Aziz thinks that "the previous degree was completely useless". Her friend Mehr thinks that "four years is a little too much, even for admission in foreign universities for futher studies we require a three years bachelor's degree so if we study here we are going to waste one important year of our life". As far as the semester system is considered students seem to be happy and satisfied. They also like the idea of home examination. Qudsia says "now at least I don't fear that an examiner would ruin my life just because he has been henpecked by his wife before checking my paper". Lahore College for Women Lahore and Government College University right now offer a two year B.A / B.Sc and a three year B.A / B.Sc (Hons). Students at both the institutes do not seem keen on opting for the three year B.A programme. Boys are not interested in studying humanities courses and they want to go into some technical field which would earn them more money. Shahid Hafiz a second year student says " I think a B.A (Hons) is worthless, its not going to make me any thing better than a regular B.A so why shouldn't I join a professional college". ...read more.

Mrs Nayyer Shah Lecturer of English at Gulberg College explains why students at her college cannot afford to take the up the option of a three or four year B.A. She says "a three year B.A/ B.Sc is only affordable for the upper crust of Pakistani Society, the poor masses are already hunger stricken, some of the students are self financing their studies if the government intends to make a three year B.A how would they be bale to afford it, I have seen students fainting in front of me because they were not properly fed. The better option would be if the government makes vocational training compulsory for students so that they can earn for themselves as soon as they complete their studies". A change in the pattern of education at B.A level is not being welcomed by all classes of society for one or the other reason. The few who like it are those who can afford to study abroad, but such people are very few. Because of various economic reasons only autonomous institutes like Lahore College, Kinnaird College and Government College can afford to offer their students a three to four years Bachelor programme. Yet the students are still not willing to accept it. To make the change acceptable to all classes of society government will have to make efforts for reduction of cost of education at grass root level. MAGAZINE JOURNALISM Mid Term Assignment FEATURE WRITING BEENISH RAI / M.C III 7TH OCTOBER 2003 ...read more.