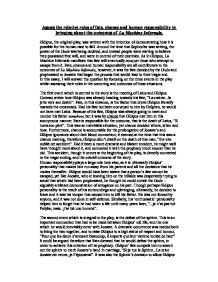 Assess the relative roles of fate, chance and human responsibility in bringing about the outcomes of La Machine Infernale.

Assess the relative roles of fate, chance and human responsibility in bringing about the outcomes of La Machine Infernale. �dipus, the original play, was written with the intention of demonstrating how it is possible for the human race to fall. Around the time that Sophocles was writing, the power of the Gods was being doubted, and instead people were starting to believe they possessed free will, and were in control of their destinies. As in �dipus, La Machine Infernale manifests that fate will eventually conquer those who attempt to escape from it. Fate, chance and human responsibility are all contributors to the outcomes of La Machine Infernale, however, it was the fate decided by the Gods and prophesised to Jocaste that began the process that would lead to their tragic end. In this essay, I will answer the question by focusing on the three events in the play whilst assessing their roles in the occurring and outcomes of these situations. The first event which is central to the story is the meeting of Laius and �dipus. Cocteau writes how �dipus was already heading towards his fate, "La crainte...le jette vers son destin". Fate, in this instance, is the factor that drove �dipus literally towards the crossroads. Had his fate not been conveyed to him by Delphes, he would not have met Laius. ...read more.

A dramatic occurrence was needed both to bring the two together, and to raise �dipus to a high status of respect and honour, "Pour que les dieux s'amusent beaucoup, il importe que leur victime tombe de haut" It could be argued therefore that Fate dictated that he would defeat the sphinx, in order to achieve this criterion of the prophecy. �dipus' fate compels him to search out the sphinx to merit Jocaste's hand in marriage, "Si je tue le Sphinx...La reine Jocaste est veuve, je l'�pouserai". It was also the Sphinx's decision to allow �dipus to guess the riddle. Though, she seems to have shown pity towards him, he was destined to succeed in order for him to marry Jocaste, and her benevolence was therefore wasted. One could argue that chance did not play a significant role in this situation. It was perhaps chance that the Sphinx liked �dipus and at that time had grown weary of killing, "...si tu n'avais eu le privil�ge de me plaire". However, in my opinion, human responsibility was crucial to this part of the play, as traits of �dipus' personality such as his ambition and thirst for glory, "J'aime les foules qui pietient...le bonheur, la chance, vivre enfin!" prompted him to search out the Sphinx and become fixated on defeating it. ...read more.

Human responsibility becomes more evident when it is revealed how both Jocaste and �dipus lied to each other, "Mon histoire de chasse...fausse come tant d'autres", "Jocaste a d� mettre son crime sur le compte d'une de ses servantes". At this point, Jocaste is tortured by that which she has ignored or been unaware of throughout her marriage, and �dipus is similarly delirious, "...c'est fini...fini" before blinding himself. Jocaste and �dipus have displayed the same personality traits as they try to outwit the Gods, by running away from or abandoning that which connects them to the fate which has been prophesised. Their naivety is displayed at numerous points throughout, and in �dipus' case, the words are even said to him, "Une femme qui pourrait etre votre m�re!", making his ignorance pathetic, if not comedic. Human responsibility is the last factor which plays a major role in this play, yet Fate is in my opnion, the most important of all as it is the fate decided by the Gods which was the starting point of the tragedy. Chance has a relatively small part to play, as although it decided the details such as how �dipus kills Laius, and the way in which Jocaste and �dipus find out they have committed incest, their fate and therefore the outcome of the play, remains the same. 1,372 words ...read more.