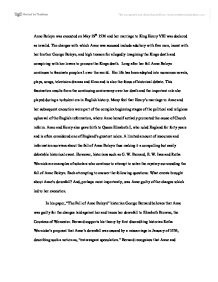 Anne Boleyn - historians such as G. W. Bernard, E. W. Ives and Retha Warnick are examples of scholars who continue to attempt to solve the mystery surrounding the fall of Anne Boleyn. Each attempting to answer the following questions: What events brought

Anne Boleyn was executed on May 19th 1536 and her marriage to King Henry VIII was declared as invalid. The charges with which Anne was accused include adultery with five men, incest with her brother George Boleyn, and high treason for allegedly imagining the Kings death and conspiring with her lovers to procure the Kings death. Long after her fall Anne Boleyn continues to fascinate people all over the world. Her life has been adapted into numerous novels, plays, songs, television dramas and films and is also the focus of historical debate. This fascination results from the continuing controversy over her death and the important role she played during a turbulent era in English history. Many feel that Henry's marriage to Anne and her subsequent execution were part of the complex beginning stages of the political and religious upheaval of the English reformation, where Anne herself actively promoted the cause of Church reform. Anne and Henry also gave birth to Queen Elizabeth I, who ruled England for forty years and is often considered one of England's greatest rulers. A limited amount of resources and information survives about the fall of Anne Boleyn thus making it a compelling but easily debatable historical event. However, historians such as G. W. Bernard, E. W. Ives and Retha Warnick are examples of scholars who continue to attempt to solve the mystery surrounding the fall of Anne Boleyn. Each attempting to answer the following questions: What events brought about Anne's downfall? ...read more.

He also investigates each of Anne's alleged lovers individually considering Anne's ability to travel and mistakes made by court clerks to explain any inconsistencies in the alleged dates of the affairs. Bernard decides that because Wyatt, Bryan and Page were all arrested and then released while Norris, Weston, Breteon, Boleyn and Smeaton were arrested, tried and executed it is rational to surmise that Anne was involved with at least some of the accused. Though all the courtier gentlemen accused denied the charges Bernard concludes that, "[p]erhaps the safest guess for a modern historian is that Anne had indeed committed adultery with Norris and briefly with Mark Smeaton and that there was enough circumstantial evidence to cast reasonable doubt in the denials of the others." Bernard's case is built on a solid scholarly assessment of sources. He takes a well known story and re-examines all of the contemporary evidence and through this process creates a new position. Though he often follows a "what if?" scenario he approaches sources and events from a mathematical perspective which forces the reader to be open minded. Bernard's use of primary sources like Eustace Chapuys and the Lancelot de Carles poem strengthens his argument. As he often demonstrates the limitations and biases of these sources, they do not interfere with his argument for the most part. However, though Bernard's argument is compelling it lacks some consideration of historical details. Firstly, he does not consider the couples need and desire for a male heir and it seems unlikely that Anne Boleyn would have risked her pregnancy with so many affairs. ...read more.

To further support this point Ives demonstrates how the law was manipulated to support the charges and questions why such steps were taken if the accused were indeed guilty. . Like Bernard, Ives believes that Henry, "turned against Anne between 18 and 24 of April" however, Ives links Henry's motivation to courtiers of the conservative faction rather than Henry's own ideas. In support of this theory he refers to two letters written by Chapuys which indicate Henry's interest in Jane and growing support for Princess Mary. In support of his own argument, that Anne was innocent, Ives first refers to two letters written by Chapuys. For Ives these letters indicate Henry's interest in Jane and growing support for Princess Mary, Henry's daughter with Katherine of Aragon, both of which he feels led to Anne's destruction Ives examines all the events surrounding Anne's fall and connects motives to, "dislike for the Boleyns, respect for the Aragon marriage and hostility to recent attacks on the church, but... primarily personal terms." Ives argument is convincing because it is a comprehensive, detailed account of what solid historical evidence is available. He makes a clear distinction between what material may be conjecture and what material is more reliable and objective. His consideration of the inconsistencies of records, review of relationships and roles and is what makes his argument the most believable. Ives portrayal of Anne reveals someone with intellect, power and passion rather than Bernard's meeker version of Anne, such a portrayal seems more realistic for a woman who There are some elements however which weaken Ives argument. ...read more.