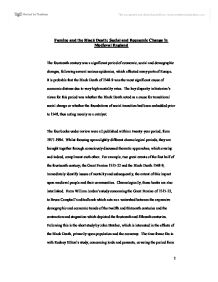 Famine and the Black Death: Social and Economic Change in Medieval England.

Famine and the Black Death: Social and Economic Change in Medieval England The fourteenth century was a significant period of economic, social and demographic changes, following several serious epidemics, which affected many parts of Europe. It is probable that the Black Death of 1348-9 was the most significant cause of economic distress due to very high mortality rates. The key disparity in historian's views for this period was whether the Black Death acted as a cause for transitional social change or whether the foundations of social transition had been embedded prior to 1348, thus acting merely as a catalyst. The four books under review were all published within a twenty-year period, from 1977-1996. Whilst focusing upon slightly different chronological periods, they are brought together through consciously discussed thematic approaches, which overlap and indeed, compliment each other. For example, two great events of the first half of the fourteenth century; the Great Famine 1315-22 and the Black Death 1348-9, immediately identify issues of mortality and subsequently, the extent of this impact upon medieval people and their communities. Chronologically, these books are also interlinked. From William Jordan's study concerning the Great Famine of 1315-22, to Bruce Campbell's edited book which acts as a watershed between the expansive demographic and economic trends of the twelfth and thirteenth centuries and the contraction and stagnation which depicted the fourteenth and fifteenth centuries. Following this is the short study by John Hatcher, which is interested in the effects of the Black Death, primarily upon population and the economy. The time frame fits in with Rodney Hilton's study, concerning lords and peasants, covering the period from roughly the late twelfth century to the early sixteenth. Hilton's focus is stated almost immediately, "my view has been that conflict between landlords and peasants....was a prime mover in the evolution of medieval society"1. The structure and perspective upon which these authors undertake their studies are of paramount importance. ...read more.

For example, in Norway, Denmark and Sweden, dynastic struggles kept the North country in constant turmoil until 1319. Rather than a cause of the famine, he maintains that, "it intensified the deprivation by expanding a production crisis into a distribution crisis as well" 14. Whilst Jordan does acknowledge the effects of war on prices, wages and subsequently, the cost of living, he fails to do with any conviction. For Mate, war is brought to the forefront of her argument, especially the outbreak of the Hundred Years War, which caused new problems on the economy. This example of war exemplifies two very contrasting views as to the importance of it as a key factor for this discussion. Both Jordan's and Mate's arguments on this issue are worthy of attention and analysis. A depiction of the Great Famine as a weather-induced phenomenon is one that overshadows Jordan's investigation. Mark Bailey's study in Before the Black Death substantiates Jordan's argument for the importance of the weather around the time of the Great Famine. Bailey correctly highlights that the effects of weather were very much a localised problem and this is constructively conveyed in the Table 6.1- Incidence of recorded sea-floods in eastern England 1275-1348, (p190)15. Both Jordan and Bailey find a link between the weather and rising grain prices, yet, for this issue, Jordan's study should be primarily consulted as his chapter concerning prices and wages identifies a number of factors, including the weather, which led to a vast rise in prices. Jordan's study on the Great Famine can be included within the theme of demography. Despite the worst periods of this famine, which began in 1315, not resulting in levels of mortality on the scale of the Black Death in 1348, the effects of the two epidemics can be inextricably linked. As Jordan found, assessing the total impact of the Great Famine is fraught with difficulties. ...read more.

His coherent argument only becomes clear a good way into the book with small case studies occupying the initial chapters. Hatcher acknowledges peasants post-Black Death as active deciders of their own destinies31. Yet, true to his Postan-like stance, it is a lesser factor in the shadow of the effects of population. This review article has touched upon a number of debates and themes, which both connect and differentiate between the books under review. In addition to assessments of the consistency of argument, the use of evidence and the incorporation of existing historiography, it is important whether or not readers actually enjoyed the material presented to them. Chapters in Before the Black Death such as Richard Munro's "Industrial Transformations in the north-west European textile trades" and Richard Smith's, "Demographic developments in rural England 1300-48" are uninspiring. The most difficult to read is Class conflict and the crisis of feudalism. Many of its chapters were very short and Hilton did not appear to be making his point entirely clear. It is possible that a fuller argument has been written in alternative material. Alternatively, as with Hatcher, Hilton may have been encouraging the reader to read outside of his study to enrich their knowledge. However, this fact does unfortunately detract from the book itself, despite Hilton's overall style being most effective in structuring his argument concerning lord and peasant relationships. Hatcher's succinctness and mixture of informative and analytical text certainly sets the reader on the path to understanding population trends in the fact of medieval plague and disease. Likewise, Jordan, despite perhaps attempting to cover too much ground in one study, is clear and analytical in approach. His insistence upon asking reams of questions becomes laborious, yet perhaps necessary which may invoke further research on such a crucial time period. In order to assess what role the Black Death did play in the transitional events which followed it, all these four books are useful starting points to initiating debate and developing arguments with which the readers themselves must make sense of. , 1 ...read more.