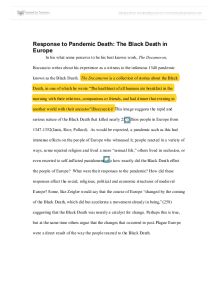 Response to Pandemic Death: The Black Death in Europe

Response to Pandemic Death: The Black Death in Europe In his what some perceive to be his best known work, The Decameron, Boccaccio writes about his experience as a witness to the infamous 1348 pandemic known as the Black Death. The Decameron is a collection of stories about the Black Death, in one of which he wrote "The healthiest of all humans ate breakfast in the morning with their relatives, companions or friends, and had dinner that evening in another world with their ancestor"(Boccaccio)! This image suggests the rapid and serious nature of the Black Death that killed nearly 25 million people in Europe from 1347-1352(Janis, Rice, Pollard). As would be expected, a pandemic such as this had immense effects on the people of Europe who witnessed it; people reacted in a variety of ways, some rejected religion and lived a more "sensual life," others lived in seclusion, or even resorted to self-inflicted punishment. So how exactly did the Black Death effect the people of Europe? What were their responses to the pandemic? How did these responses effect the social, religious, political and economic structures of medieval Europe? Some, like Zeigler would say that the course of Europe "changed by the coming of the Black Death, which did but accelerate a movement already in being,"(258) suggesting that the Black Death was merely a catalyst for change. Perhaps this is true, but at the same time others argue that the changes that occurred in post-Plague Europe were a direct result of the way the people reacted to the Black Death. While the focus of this paper is on the aftermath of the Black Death, it is imperative to have a basic understanding of the social and economic condition of Europe during the fourteenth century in order to fully comprehend its impact. ...read more.

According to Zeigler, wages of agricultural workers nearly tripled in the years following the Black Death, which had an enormous effect on the economy as a whole (Zeigler 236-238). Lords and landowners enjoyed a brief prosperity through the gaining of leftover property, but the shortage of labor, and plentiful crops had an opposite effect as they began to lose money on their great estates. Following the Black Death there was an undeniable increase in the wealth of the laborers and peasants while the formerly upper-class began to feel the losses associated with the dramatic drop in the demand of the economy. The economic shift that followed the Black Death had many social implications as well. With the increase in the wealth of the peasant class came a bridge in the gap between the upper-class and the laborers of medieval Europe. Prior to the Black Death the division between the landowners and those that worked the land was immense, and the power over the peasants was more like that of a slave-owner than an employer (Zeigler 237, Mullet 24). One of the most important upheavals in the social system of post-Plague Europe was the surge of the peasant revolts that followed (Mullet 25). These revolts forced many of the landowners out of the countryside and into the cities along with many of the laborers who found that even with the land they had acquired, life was not very easy (Mullet 26). Regardless, the years following the Black Death left both the upper-class and lower-class of the Pre-Plague times substantially closer to the "middle" of the socio-economic ladder. With a leveling of the social structure and an influx of much of the laborers and landowners into the cities came the elements needed for the urban industrial revolution of the sixteenth and seventeenth century (Zeigler 248). ...read more.

At the same time, it is important to take an independent view of the changes themselves, outside of the context of the Plague, so that they may be seen for what they are. With an understanding of the changes that took place following the devastation caused by the Black Death, in addition to the experiences of those who lived through it, both arguments can be presented. There is a significance to each argument, and it is the decision of the reader to form an opinion as to which argument they believe is more fitting to their own beliefs on the issue of human experience. If one answer was clearly correct, then the controversy would not remain as it has in the time since the Plague itself. So, then, with no clear answer, what is the point of presenting these arguments? In a world that is constantly being affected by diseases such as AIDS, mass-casualty war, and natural disasters, it is important to have a critical standpoint on the effects that these incidents have on an individual. Understanding the effects of such experiences and how they lead to change can provide clues to the future of areas that will undergo extensive change. Being able to predict trends for the future, and not repeating mistakes made in the past can help aid the rebuilding of countries and areas who are rebuilding much in the way that Europe had to rebuild itself following the Plague. Whether it is for the betterment of the future when disaster will inevitably strike again or just for awareness, understanding the effect of the extreme devastation caused by the Black Death on the social, economic, and political aspects of Europe is key. ...read more.

This essay is well written and has a good structure. It successfully uses a range of sources to illustrate the points made. It could be improved by applying greater critical analysis to the historical sources used. Four stars.