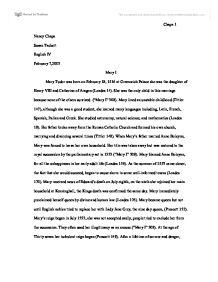 Mary Tudor was born on February 18, 1516 at Greenwich Palace she was the daughter of Henry VIII and Catherine of Aragon (Loades 14).

Nancy Chapa Susan Tackett English IV February 7,2003 Mary I Mary Tudor was born on February 18, 1516 at Greenwich Palace she was the daughter of Henry VIII and Catherine of Aragon (Loades 14). She was the only child in this marriage because none of the others survived ("Mary I" 308). Mary lived an unstable childhood (Tittler 147), although she was a good student, she learned many languages including, Latin, French, Spanish, Italian and Greek. She studied astronomy, natural science, and mathematics (Loades 18). Her father broke away from the Roman Catholic Church and formed his own church, marrying and divorcing several times (Tittler 148). When Mary's father marred Anne Boleynn, Mary was forced to leave her own household. Her title was taken away but was restored to the royal succession by the parliamentary act in 1553 ("Mary I" 309). Mary blamed Anne Boleynn, for all the unhappiness in her early adult life (Loades 156). As the summer of 1553 came closer, the fact that she would succeed, began to cause alarm in some well-informed towns (Loades 170). Mary received news of Edward's death on July eighth, on the ninth she rejoined her main household at Kenninghall, the Kings death was confirmed the same day. ...read more.

Unfortunately for Mary, Two factors compelled her opposition to her plans: the English people hated foreigners especially the Spanish, and twenty years of Protestantism had soured the English popery (Tittler 277). The announcement of Mary and Philip brought on three rebellions including Wyatt's Rebellion (Loades 225). Philip later became king of Spain on July 25, 1554 (Loades 225). During Mary's reign she was never able to provide an heir although she was thought to be pregnant twice (Lewis 298). Mary I was encouraged to ally Spain in a war against France, she lost Calasis, the only English held possession in France . She was also a failure when it came to foreign affairs (Erickson 386). When Philip's father retired of the Holy Roman empire and he returned to spain, Mary died a mere ten months later (Lewis 258). Mary knew she failed in her marriage, not providing an heir, losing Calasis and marrying a foreigner she had to recognize her sister Elizabeth as her successor (Erickson 409). Mary was expected to wipe out unpopular Protestantism and restore her father's religion (Loades 178). That is just what she did , as soon as she was the queen she went to work bringing the Roman Catholic faith back to England, first she substituted the wonderful religious proclamations of Edward VI, and replaced them with old English laws enforcing heresy against the church (Prescott 203). ...read more.

Mary had another name other than Bloody Mary. A Scottish reformer, named John Knox, called Mary the wicked Jezebel of England. In fact this was her first name then people later called her "Bloody Mary"("Mary I" 309). Mary's persecution came from pure desire for purity in faith that from vengeance(Erickson 390). Mary killed everyone who wasn't her religion, she failed to convert society into one ideological pattern (Tittler 272). Mary Reigned for a short five years, her reign was unfruitful and she never accomplished any positive things for England (Lewis 401). Religious dissent reached its highest peak and England lost her last continental territory during Mary's horrible reign (Lewis 341). England suffered during the reign of Mary I, the economy was in ruin (Tittler 301). Mary knew her hard work in bringing the catholic faith back to England would be for nothing once Elizabeth took power, she died in 1558, only five short years she was wade queen of England (Tittler 501). Mary was tortured by loneliness and unhappiness all her life which played a big part in the direction her reign was led, she was now succeeded by her popular sister queen Elizabeth I (Lewis 380). Mary's uncompromising attitude toward Protestantism, and her sister Elizabeth's success, have made save that she be remembered as the least successful Tudor ("Mary I" 309). Chapa 5 ...read more.