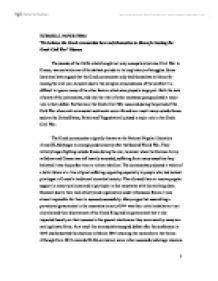 &quot;On balance the Greek communists have only themselves to blame for loosing the Greek Civil War&quot; Discuss

TUTORIAL PAPER TWO: "On balance the Greek communists have only themselves to blame for loosing the Greek Civil War" Discuss The decade of the 1940s which bought not only occupation but also Civil War to Greece, was certainly one of the darkest periods in its long history of struggles. Some historians have argued that the Greek communists only had themselves to blame for loosing the civil war, however due to the complex circumstances of the conflict it is difficult to ignore many of the other factors which also played a large part. Both the lack of unity of the communists, and also the rival of other resistance groups played a major role in their defeat. Furthermore the Greek Civil War occurred during the period of the Cold War where anti communist sentiments were rife and as a result many outside forces such as the United States, Britain and Yugoslavia all played a major role in the Greek Civil War. The Greek communists originally known as the National Popular Liberation Army (ELAS) began to emerge predominantly after the Second World War. They initially began fighting outside forces during the war, however when the German Army withdrew and Greece was left heavily wounded, suffering from many casualties they believed it was the perfect time to initiate rebellion. ...read more.

decision to replace Vafiades with Nikos Zahariadis in 1947 and his decision to move away from guerilla style warfare to more conventional methods was one of many reasons which caused the communists to be defeated in the Greek Civil War. The traditional style of warfare was not suited to the communists as they ultimately lacked significant weapons and warfare training compared with EAM which was backed by Britain and later the United States. As a result the communists were both outmanned and out gunned and therefore were pushed northwards into the mountains of Greece. The decisions made by the Greek democratic Army were extremely unwise considering their position and power or lack of, and as a result many argue that this caused the communists to be defeated in the Greek Civil War. Many other factors besides the flaws made by the communists however also contributed to their defeat in the Greek Civil War. The role of communist outside forces played a particular important part. ELAS had hoped for Soviet Support throughout its being however although Stalin had interests in the Balkan region his fear of open conflict with the West and its allies deterred him from offering direct assistance to the Greek communists. Furthermore the agreement made at the Yalta Conference in 1945 further discouraged him. ...read more.