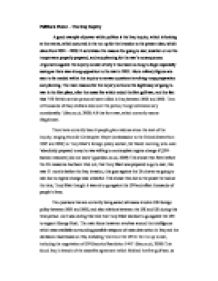 Politics is Power - The Iraq Inquiry A good example of power within politics is the Iraq inquiry, which is looking at the events, which occurred in the run up for the invasion to the present date, which dates from 2001 - 2009. It scrutinises the reasons for going to war, weather or not the troops were properly prepared, and any planning for the war's consequences. Arguments against the inquiry consist of why it has taken so long to begin especially seeing as there was strong opposition to the war in 2001. More military figures are seen to be needed within the inquiry to answer questions involving troop preparation and planning. The main reasons for the inquiry surround the legitimacy of going to war in the first place, after the cease fire which ended the first gulf war, and the fact that '179 British service personnel were killed in Iraq between 2003 and 2009. Tens of thousands of Iraqi civilians died over the period, though estimates vary considerably.' (bbc.co.uk, 2009) All this for a war, which currently seems illegitimate. ...read more.

This found Iraq in breach of the ceasefire agreement which finished the first gulf war, as they refused to comply with weapons inspectors, they were warned that there would be 'serious consequences' (bbc.co.uk, 2009) Which does imply military action, the UN however when it came to it, were unprepared to use force to remove these weapons of mass destruction. People who will be appearing before the end of 2009 include Sir John Scarlett, who was the head of the joint intelligence committee. It was his 'dossier on the threat posed by Iraq and its WMD capability caused such controversy before and after the war.' (bbc.co.uk 2009) Sir John Scarlett's question will prove vital to the inquiry, as it was his dossier, which debatably proved that Iraq was developing weapons of mass destruction. Another key figure who will be interviewed before the end of the year is Sir John Sawers, who was Tony Blair's private secretary between 1999 and 2001, he will be able to tell the committee why he advised Tony Blair to become to close to George Bush and disregard UN regulations. ...read more.

this is showing that even though Tony Blair did hold the most power at the time the decision was made to go to war, he is still able to be scrutinized by the public. Due to the nature of the inquiry, and how much the war affects the country as a whole, from major politicians such as Gordon Brown, to the general public, the decision was made to make the inquiry held in the public eye. Gordon Brown seemed to agree with this, 'Prime Minister announced the inquiry, he claimed that national security would be the only legitimate barrier to full disclosure' (times-online, 2009) then making a u-turn on this by imposing other restrictions to protect economic and Commercial interests, using his power to prevent aspects of the report showing he doesn't want to be made public. This inquiry is the perfect example of power in politics, from Tony Blair using his power to ignore the UN, to Gordon Brown using his power to disclose parts of the inquiry which will inevitably show him and other Labour ministers in a bad light. This affects the public substantially as, due so certain bits of information being hidden, they may never know fully weather the war was legal and for the right reasons. ...read more.