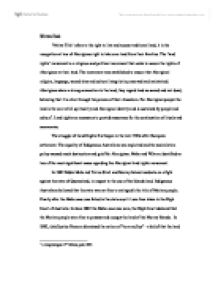 Religion. Dreaming influenced the Land Rights Movement as it depicts the importance of Land in Aboriginal culture, rituals and beliefs. Through the Dreamtime stories we can establish that Indigenous Australians believe that people are a part of and conne

Written Task 'Native Title' refers to the right to live and access traditional land; it is the recognition at law of Aborigines right to take over land from their families. The 'land rights' movement is a religious and political movement that seeks to secure the rights of Aborigines to their land. The movement was established to ensure that Aboriginal religion, language, sacred sites and cultural integrity is preserved and maintained. Aborigines share a strong connection to the land; they regard land as sacred and not dead, believing that it is alive through the powers of their Ancestors. For Aboriginal people the land is the core of all spirituality and Aboriginal identity and is sustained by people and culture1. Land rights are necessary to provide assurance for the continuation of rituals and ceremonies. The struggle of Land Rights first began in the late 1700s after European settlement. The equality of Indigenous Australians was exploited and the assimilation policy caused much destruction and grief for Aborigines. Mabo and Wik are identified as two of the most significant cases regarding the Aboriginal land rights movement. ...read more.

Wik focused on the situation concerning pastoral leases. The case claimed native title over the traditional land of Cape York Peninsula, Queensland. This decision determined that the native title could co-exist with other rights on the land held under pastoral lease. The court ruled that as the circumstances of pastoral leases differ, each must be judged independently. John Howard Government developed a 10 point plan of which aimed to negotiate and facilitate indigenous Australians rights. 4. A significant aspect of the Wik decision is that these leases cover a vast area of 42% of Australian land mass. Nevertheless when pastoralists and Aboriginal rights were in conflict, the pastoralists' rights would succeed, giving pastoralists certainty to continue with grazing and related activities5. The Mabo and Wik cases achieved the recognition of Aboriginal Land Rights. The decisions impacted the way in which Indigenous Australia's were treated. The cases acknowledged the significance of land in Aboriginal culture, heritage and way of life. The dreaming was a significant impact for the Land Rights Movement as it is the heart of Aboriginal culture, religion, society and life. ...read more.

The Dreaming was a way in which Aboriginals were able to live their traditional, nomadic lifestyles and beliefs. The land was a substantial aspect of these beliefs and rituals. The Aboriginal concept of land ownership was that a specific group will have land which they search for food and water. The group holds responsibility for the land and must be aware of the ritual features the land entitles. The area of land which they must take care and nurture is known as their ritual estate. The Dreaming is a link between the Aborigines and the land. It connects to the land values which are expressed through dreamtime stories, art and rituals which clarify that the land is a sacred place, it is their home of which offers a variety of abundance and is kept alive through oral traditions. The Dreaming teaches that the land is the basis of Aboriginal kinship, identity and spirituality. Aboriginal society is grounded by its relationship with the land, of which the Ancestral beings shaped the environment and responsibilities by which aboriginal people live their lives7. It is due to the dreaming values and Mabo and Wik cases that Land ownership has began to be recognized and respected. ...read more.