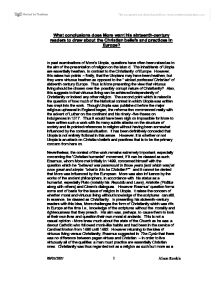 What conclusions does More want his sixteenth-century readers to draw about the Christian beliefs and practices in Europe? In past examinations of More's Utopia, questions have often been raised as to the aim of the presentation of religion on the island. The inhabitants of Utopia are essentially heathen, in contrast to the Christianity of Europe. However, this raises two points - firstly, that the Utopians may have been heathen, but they were virtuous heathen as opposed to the "wicked professed Christian" of sixteenth century Europe. Thus is More presenting the view that virtuous living should be chosen over the possibly corrupt nature of Christianity? Also, this suggests to that virtuous living can be achieved independently of Christianity or indeed any other religion. The second point which is raised is the question of how much of the historical context in which Utopia was written has crept into the work. Though Utopia was published before the major religious upheaval in England began, the reformation commenced really with the advent of Luther on the continent and his ninety-five theses on indulgences in 1517. Thus it would have been nigh on impossible for More to have written such a work with its many subtle attacks on the structure of society and its pointed references to religion without having been somewhat influenced by the contextual situation. ...read more.

Both Erasmus and Bude are known to have commented on this, Bude calling Utopia a "holy community" and Erasmus "a holy commonwealth". Erasmus also comments on the ways in which "Utopians surpass[ed] European Christians in several matters characteristically Christian - Utopian rejection of astrological superstition, Utopian belief in immortality, and the sanctity of the Utopian Priesthood". These comments are founded in the text itself - both in the content and indeed the language implemented. The Utopians, in comparison to the Europeans, posses virtue and faith; in fact they posses all the virtues 'More had described as Christian a decade earlier - simplicity, temperance [and] frugality'. The way in which a number of the Utopian people are converted to Christianity because it complies with their deepest beliefs, rather than because of the miracles and such, shows the penetration of their faith. However, it is faith, fundamentally, without a name. They follow in all the ways of Christianity with no knowledge of the scriptures and without actually calling themselves Christian. Can the Utopians thus be referred to as Christians? They were, perhaps, closer to being truly Christian than the baptised masses in Europe. Their community living, their ability to give without requiring anything in return and hence their charitable qualities - all are elements which ring very true of the ideal form of Christianity. ...read more.

Essentially, and at its most basic and crude, More is attacking the all talk, no action nature of Christian practices in Europe at the time. We must not forget that it is a generalisation, though it seems historically to be largely correct. Also, we must bear in mind that this is a work of fiction, in which the author presents his views through an imaginary island called "no place" (in comparison with the translated meaning of 'Europa'). He does this by presenting a non-Christian society that is far more Christian in its beliefs and practices than societies that claimed to be Christian. This challenges the beliefs of the reader, and, in the case of the sixteenth century reader, may invoke a need for them to examine their own lives. It is also an analysis of the church as a whole, and the methods it employed to religiously "govern". Hence, rather than provoking a conclusion, More incites a number of serious and important questions for consideration, in line with the Christian humanist method of thought. The answer to these questions is somewhat summarised by Erasmus: "Who is truly Christian? Not he who is baptised or anointed, or who attends church. It is rather the man who has embraced Christ in the innermost feelings of his heart, and who emulated Him by his pious deeds". That is possibly the conclusion More intended his sixteenth century readers to be lead into deducing for themselves. ...read more.