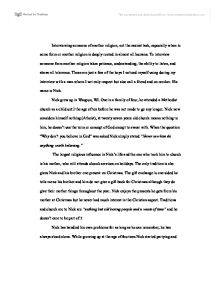 Interviewing someone of another religion, not the easiest task, especially when in some form or another religion is deeply rooted in almost all humans. To interview someone from another religion takes patience, understanding, the ability to listen, and above all tolerance. Those are just a few of the keys I noticed myself using during my interview with a man whom I not only respect but also call a friend and co-worker. His name is Nick. Nick grew up in Waupun, WI. One in a family of four, he attended a Methodist church as a child until the age of ten before he was not made to go any longer. Nick now considers himself nothing (Atheist), at twenty seven years old church means nothing to him; he doesn't use the term or concept of God except to swear with. When the question "Why don't you believe in God" was asked Nick simply stated "Never saw him do anything worth believing." ...read more.

Nick doesn't see God's hand so he doesn't believe or care if God exists. Nick doesn't say Christians are wrong and he believes in live and let live along with do/believe in whatever makes you happy. He will accept a "God bless" with a "Thanks, you too" from someone he respects, and for those he doesn't respect he just ignores or has a much ruder comment. Nicks guidance more has to do with avoiding punishment from the law although he has broken it quite a few times to have a good time; he says Karma's a ***** so don't do nothing stupid like me" and for all the years I have known Nick I've learned to take most of his advice. He may not believe in God as I do but he has learned what not to do both the hard way and by observing others who did it the hard way. ...read more.

If I could add to the quote a brief addition it would only be to say - it is the duty of every cultured man and woman to share their knowledge with those who have little and help bring understanding to the races of the world. In closing, even though Nick and I do not see eye to eye on our faith and religious beliefs, I believe we get along well and it should be a tolerated understanding acceptance between us. He is a hard worker, a nice person and whatever his religious beliefs or lack there of doesn't make him a bad person or change the fact he is a human being and has all the rights those of us in religious faiths have. As the Declaration of Independence states "We hold these truths to be self-evident, that all men are created equal, that they are endowed by their Creator with certain unalienable Rights, that among these are Life, Liberty and the pursuit of Happiness. ...read more.