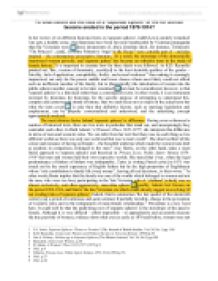 To what extent did the idea of a separate sphere(TM) of life for women become eroded in the period 1870-1914?

To what extent did the idea of a 'separate sphere' of life for women become eroded in the period 1870-1914? In her review of six different historical texts on 'separate spheres', Judith Lewis astutely remarked: 'one gets a healthy sense...that historians have been far more bamboozled by Victorian propaganda than the Victorians were.'1 Indeed, 'proponents of...[the]...feminine ideal...for instance, Tennyson's "The Princess"...[and]...Coventry Patmore's 'Angel in the House'2 were certainly part of - and also inspired - the contemporary prescriptive literature. As a result, the stereotype of the domestically imprisoned woman prevails, and 'separate sphere' has become an orthodox term in the study of female history.3 It is important to examine how far these ideals were followed. As K.D. Reynolds pointed out, 'this...version of femininity...ascrib[ed] to the least desirable qualities of the gender - frivolity, lack of application, corruptibility, frailty...and sexual weakness'4 thus making it seemingly impractical, not only for the poorer middle and lower classes whom most likely could not afford such an inefficient member of the family, but in (theoretically) the introduction of women into the public sphere (another concept to be later examined). What must be remembered, however, is that 'separate spheres' is a historical rather than a contemporary term. In other words, it is an instrument invented by historians for historians for the specific purpose of attempting to understand this complex and controversial strand of history, thus we must focus not so much on the actual term but what the term covers. ...read more.

In theory, this was most definitely an erosion of the 'separate spheres' not only in the woman entering the man's world of office work (the contemporary feminist Ethen Snowden sneered that "only well paid jobs [were] ever designated as 'unfeminine'."17) but in the fact that an uneducated women could potentially support herself without a husband. What does not erode the 'separate spheres' idea was the fact while women became accepted to be better typists than men, they also became pigeon-holed into the concept they were only worthy of working as a man's servant, hence it was still as though they were inferior. Another source that denounces the idea that it erodes the 'separate spheres' is John Galsworthy's play 'The Fugitive'. In the play a wife runs away to live with a penniless lover in the belief that she could succeed as a typist. Due to the lack of free-lance work available she cannot support herself and is forced to prostitute herself18. In other words, although the potential for a woman to support herself without a husband was made available with the invention of the typewriter, it did not necessarily mean that success in independence was guaranteed. Indeed, in 1901, an employment census was taken and found that compared to 1871 where 36 percent of women worked, only 31.6 percent were in employment.19 Although the decreased figures could be to do with the way the census was conducted (prostitutes and part time workers ...read more.

This essay is well written and well structured, and explores several interesting themes well. The student is clearly familiar with the historiography on the topic and uses it well, although a wider range of references would be helpful in places. It would also be useful to consider whether the experience of separate spheres varied by class, region or occupation.
4 stars.