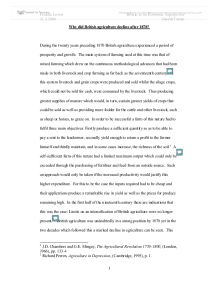 Why did British agriculture decline after 1870?

Why did British agriculture decline after 1870? During the twenty years preceding 1870 British agriculture experienced a period of prosperity and growth. The main system of farming used at this time was that of mixed farming which drew on the continuous methodological advances that had been made in both livestock and crop farming as far back as the seventeenth century. In this system livestock and grain crops were produced and sold whilst the silage crops, which could not be sold for cash, were consumed by the livestock. Thus producing greater supplies of manure which would, in turn, sustain greater yields of crops that could be sold as well as providing more fodder for the cattle and other livestock, such as sheep or horses, to graze on. In order to be successful a farm of this nature had to fulfil three main objectives: Firstly produce a sufficient quantity so as to be able to pay a rent to the landowner, secondly yield enough to return a profit to the farmer himself and thirdly maintain, and in some cases increase, the richness of the soil.1 A self-sufficient farm of this nature had a limited maximum output which could only be exceeded through the purchasing of fertiliser and feed from an outside source. ...read more.

This is the second reason why British agriculture remained profitable despite being open to foreign competition. However, developments in technology were taking place that would bring this land closer to the British markets. The advent of the steam ship had a considerable role to play in this. In 1882 it cost 1p per lb to ship mutton from New Zealand to Britain whereas by 1889 this had fallen to 0.2p. Likewise it to move a quarter of wheat from Chicago to Liverpool cost 80p in the late 1860s but only 20p by the turn of the century. This fall accounts for half the fall in wheat prices in Britain during this period.7 In the same way that the bad weather had prevented the farmers from realising early enough that something needed to be done the combination of distance and conflict, rather than protecting the British agriculture as it would seem, actually caused it to decline once the full effects could be felt. These factors served to shield British agriculture from the full impact of foreign competition. One solution to the problem of cheap imports goods was to specialise produce. ...read more.

The decline of agriculture came because they were initially unable to see this change take place and by the time they had were mostly in a position from which they were unable to do anything about it. The era of mixed self sufficient farming was over, the fact that so many farmers stuck by this method long after it had become obsolete is why agriculture can be seen declining. As far as they were aware there was no reason not too; this method of farming had turned over huge profits in the preceding period. As the British markets were not yet flooded with cheap foreign imports it seemed as if this would continue. It is unfortunate that the period directly leading up to the actual opening of British markets, some 30 years after the repeal of the Corn Laws, was one of hardship. This was caused by bad harvests and a diminishing livestock population and meant that the agricultural industry did not have sufficient capital to invest in the changes it needed to make in order to continue its status as the most advanced agricultural industry in the world. Due to the changes that were going on in the rest of the economy it did suffer badly because of this and the British economy continued to go from strength to strength. ...read more.

This essay covers the content well and makes cogent arguments. It would be useful for the student to engage more closely with the historiography on the topic, and show areas of debate and contrast. It would also be better to restructure the essay so that the paragraphs were shorter and the argument clearer.
4 stars.