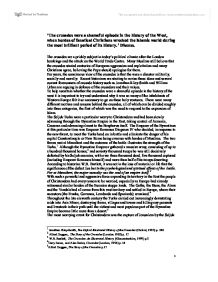 Were the Crusades a shameful episode in the history of the west?

'The crusades were a shameful episode in the history of the West, when hordes of fanatical Christians wrecked the Islamic world during the most brilliant period of its history.' Discuss. The crusades are a prickly subject in today's political climate after the London bombings and the attack on the World Trade Centre. Many Muslims still believe that the crusades started centuries of European aggression and exploitation and many Christians agree, believing the Pope should apologise for them. For years, the unanimous view of the crusades is that the were a disaster militarily, socially and morally. Recent historians are starting to revise these ideas and several current forerunners of crusade history such as Jonathan Riley-Smith and William Urban are arguing in defence of the crusaders and their values. To help ascertain whether the crusades were a shameful episode in the history of the west it is important to try and understand why it was so many of the inhabitants of Western Europe felt it so necessary to go on these holy ventures. There were many different motives and reasons behind the crusades, all of which can be divided roughly into three categories, the first of which was the need to respond to the expansion of Islam. The Seljuk Turks were a particular worry to Christendom and had been slowly advancing through the Byzantine Empire in the East, taking control of Armenia, Caesarea and advancing almost to the Bosphorus itself. The Emperor of the Byzantines at this particular time was Emperor Romanus Diogenes IV who decided, in response to the new threat, to meet the Turks head on in battle and eliminate the danger of his capital Constantinople or New Rome being overrun with hordes of Muslims. The two forces met at Manzikert and the outcome of the battle illustrates the strength of the Turks.1 Although the Byzantine Emperor gathered a massive army, consisting of up to a hundred thousand horses,2 and seventy thousand troops he was still decisively defeated by his Seljuk enemies, with over three thousand dead, five thousand captured (including Emperor Romanos himself) ...read more.

Jerusalem, the prize trophy, was never recaptured and most attempts by Christian soldiers to reclaim the areas of importance ended in decisive and often humiliating defeats. The Fourth Crusade (1202-1261) stands out as a particular failure. Their ambitious plans of attacking Jerusalem through Egypt were thwarted by being unable to pay (through poor planning and lack of communication) the Venetians who had been contracted to transport them there.19 In order to get the money, the crusading forces agreed to help the Venetians settle a debt by capturing the Christian town of Zara, this venture snowballed into more debts and problems until the Christian army agreed to help reinstall Prince Alexius Angelus as head of Constantinople.20 Not only had they failed to get anywhere near their goal, but the crusaders ended up sacking the Orthodox centre of Christianity in an infamously ruthless and brutal fashion. An eyewitness account describes the scene: The Latin soldiery subjected the greatest city in Europe to an indescribable sack. For three days they murdered, raped, looted and destroyed on a scale which even the ancient Vandals and Goths would have found unbelievable...Though the Venetians had an appreciation for the art which they discovered (they were themselves semi-Byzantines) and saved much of it, the French and others destroyed indiscriminately, halting to refresh themselves with wine, violation of nuns, and murder of Orthodox cleric.21 Even at the time, the stupidity and gravity of their actions was easy to see as he goes on to say: The estrangement of East and West, which had proceeded over the centuries, culminated in the horrible massacre that accompanied the conquest of Constantinople. The Greeks were convinced that even the Turks, had they taken the city, would not have been as cruel as the Latin Christians. The defeat of Byzantium, already in a state of decline, accelerated political degeneration so that the Byzantines eventually became an easy prey to the Turks. ...read more.