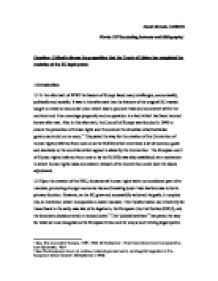 David McCabe 11090596 Words: 2837(excluding footnotes and bibliography) Question: Critically discuss the proposition that the Treaty of Lisbon has completed the evolution of the EU legal system 1 Introduction: 1.1 In the aftermath of WW2 the leaders of Europe faced many challenges, economically, politically and socially. It was in this aftermath that the framers of the original EC treaties sought to create an economic union which was to promote trade and commerce within the continent and thus encourage propensity and co operation in a land which had been haunted by war after war. Also in this aftermath, the Council of Europe was founded in 1949 to ensure the protection of human rights and thus ensure the atrocities of authoritarian governments did not re-occur.1 This paved the way for the creation of the Convention of human rights (referred from now on as the ECHR) which enshrined a set of common goals and standards to the countries which agreed to abide by the Convention. The European court of Human rights (referred from now on as the ECtHR) was also established as a mechanism to which human rights cases and states in breach of the Convention could have the issues adjudicated. 1.2 Upon the creation of the EEC, fundamental human rights were not considered part of its mandate, promoting stronger economic ties and breaking down trade barriers was to be its primary function. However, as the EC grew and successfully achieved its goals, it morphed into an institution which incorporated a wider mandate. This transformation can inherently be traced back to the early case law of its legal arm, the European Court of Justice (EUCJ), and the landmark decisions which it handed down.2 This 'judicial activism'3 has paved the way for what we now recognise as the European Union and its unique and thriving legal system. 1.3 In the Lisbon treaty, the EU has been given a legal personality and will finally ascend to the Convention of Human rights. ...read more.

The protection of equality between men and women does not, however, prevent the maintenance or adoption of measures providing for specific advantages in favour of the under-represented sex (i.e. positive discrimination). 4.5 It should be noted that the rights in the ECHR are considered to be a minimum standard of protection. It is recognised in article 52(3) of the Charter that the EU might provide a higher standard since it provides that "this provision shall not prevent Union law providing more extensive protection" .The result of this provision could be that the EU and national courts will build on and develop the ECHR rights through the Charter. 4.6 Another important issue is whether the ECJ has now been empowered to review any provision of national law in the light of the Charter. Even in areas where the EU can legislate, the reach of the Charter is not boundless. The Charter settles that national authorities, when acting outside the scope of EU law, are not bound by its provisions since it provides that the national authorities must respect EU fundamental rights "only when they are implementing Union law". In other words, it is still a condition for the EU courts in exercising their jurisdiction that the relevant national measures fall "within the scope" of EU law. The individuals haven't now gained the right to institute judicial proceedings on the basis of any provision of the Charter, in any situation, against any measure adopted by national or EU public authorities. 4.7 The EUCJ does makes clear that EU fundamental rights are binding on national authorities when they apply provisions of EU law which are based on protection for fundamental rights, or enforce and interpret EU rules or invoke EU derogation rules relating to the fundamental economic freedoms such as the free movement of goods 5 Has the aforementioned changes mentioned above completed the EU legal systems evolution? ...read more.