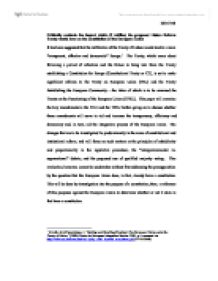 impact of the Treaty of Lisbon

Critically evaluate the impact which, if ratified, the proposed Lisbon Reform Treaty would have on the constitution of the European Union It has been suggested that the ratification of the Treaty of Lisbon would lead to a more "transparent, effective and democratic" Europe.1 The Treaty, which came about following a period of reflection and the failure to bring into force the Treaty establishing a Constitution for Europe (Constitutional Treaty or CT), is set to make significant reforms to the Treaty on European Union (TEU) and the Treaty Establishing the European Community - the latter of which is to be renamed the Treaty on the Functioning of the European Union (TFEU). This paper will examine the key amendments to the TEU and the TFEU before going on to discuss whether these amendments will serve to aid and increase the transparency, efficiency and democracy and, in turn, aid the integration process of the European Union. The changes that are to be investigated lie predominantly in the areas of constitutional and institutional reform, and will focus on such matters as the principles of subsidiarity and proportionality in the legislative procedure; the "intergovernmental vs. supranational" debate; and the proposed use of qualified majority voting. This evaluation, however, cannot be undertaken without first addressing the presupposition by the question that the European Union does, in fact, already have a constitution. ...read more.

Second, the European Council and the European Central Bank (ECB) are to become institutions of the Union. Third, the European Commission, after 31st October 2014, will be made up of a number of members equal to one third the number of Member States. Moreover, the President of the Commission shall be nominated by the Council under a qualified majority of vote and then elected by the European Parliament. Third, the ToL will provide for a unification of the roles of the High Representative for the Common Foreign and Security Policy (CFSP) and the Commissioner for External Relations. This role will be undertaken with the title of High Representative. The holder of the role will also, at the same time as fulfilling the original duties under the High Representative for the CFSP, chair the Foreign Affairs Council and become the Vice-President of the Commission. Fourth, the Treaty will introduce a double majority voting system. This specifies that a matter that is to receive national votes must find a majority under two criteria: first, a majority is reached by 55% of Member States; and second, the majority Member States make up 65% of the population of the European Union. This is therefore a type of qualified majority voting. It has been further decided that this feature will not apply until 2014 and for a period of three years, if a member state is of an opinion that the proposal could have been blocked, the old ...read more.

Finally, the notion of a more democratic EU. The ToL has afforded Member State parliaments a greater level of control over legislative procedures. Moreover it increases the powers of the European Parliament in the area of co-legislation. This means that it will be placed on equal footing with the European Council within the legislative procedures. This is heralded by H?reth and Sonnicksen as "one of the most significant achievements of the Lisbon Treaty as far as enhancing democracy in the Union is concerned"18 Lastly the citizens initiative mentioned under Title II of the TEU as introduced by the ToL is evidence of a further shift towards a more democratic European Union. In Conclusion this paper has explored the amendments and new introductions of the Treaty of Lisbon under the existing Treaty on the European Union and the Treaty on the Functioning of the European Union, formerly the Treaty establishing the European Community. Discussion then turned to the question as to whether or not the ToL has succeeded in making a more transparent, efficient and democratic European Union. It has been opined that, although it could not be described as aiding the transparency, it has succeeded in providing a considerable shift towards greater efficiency and democracy. It is on the basis of these evaluations that one must conclude that, even though there is definite room for further positive shifts, the current shifts have served to strengthen the constitution of the European Union without imposing the negative constraints of the strict wording of the Constitutional Treaty. ...read more.